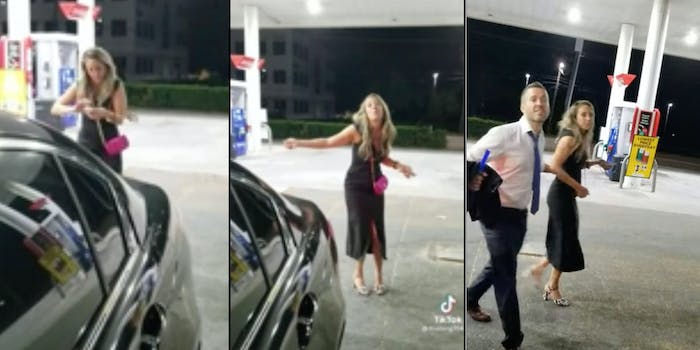 'I work all day, and you guys give me the wrong sh*t here'

A video originally shared to TikTok shows an Asian Uber driver ejecting a car full of riders because a Karen in the car was allegedly racist and rude during the ride, and then told the driver to “Go back to Asia” even as her companions were trying to calm her down.

The video appears to be from the @thailong704 TikTok account, and while that account’s currently scrubbed of videos, the stamp is clearly marked on the Reddit version of the video that still exists. (It’s appropriately on the r/PublicFreakout subreddit).

The video also exists, in a slightly longer form, on YouTube, where a user named Thai Long has posted, using the title “Asian Hate” for the video.

He wrote, by way of explanation, “I am Uber driver from Charlotte NC.”

As he set this scene, “This lady name Stella, this Asian hate[r], she put this wrong address, I try to figure it out, but she cussed me out I told her to get out.”

The Reddit version of the video starts with Long, the driver, asserting why he’s made them leave his car, and the Karen says, “Fuck you” before moving around to the back of the vehicle, where she appears to be trying to take photos of his license plate.

The driver asserts that he’s going to call 911 as she’s lingering around the car, while a female companion with her looks stricken, and her male companion apologizes to the driver, then appears to be trying to escort her away from the car.

At one point, she moves a couple of steps toward Long and screams, “Go back to Asia!” This makes her male companion furious, and he redoubles his efforts to escort her away.

In the longer video, the driver asks the man, “Please take her away,” and the man nods in response. The driver threatens to call 911 again, and as Stella says, “I already called 911 on you,” the man tells the driver, “Please leave” several times.

The man then comes toward Long, as Long’s asserting that he’s done nothing wrong, and the man says, “You did not deserve that.”

“Nothing at all,” the man responds.

“All I did was drive,” Long asserts, as Stella, far in the background, appears to flip him off.

“Please leave,” the man repeats. “I am sorry. You are a good man, and you are working your fucking ass off. I am sorry.”

While respondents on Reddit were sympathetic to the driver, they also gave support to the man who was trying to get Stella—who appeared to have been overserved in both videos—away from Long and into a new rideshare.

“I feel so bad for that dude,” one Redditor observed. “I’d be just completely embarrassed to even be associated with her. Now he’s probably going to have people he barely even knows coming up to him about this crap.”