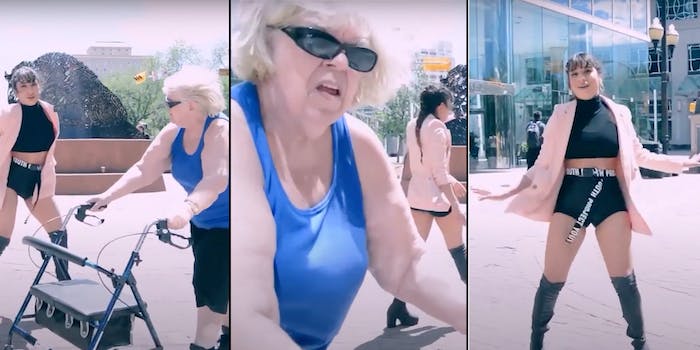 ‘This is not a burlesque club’: Karen gets triggered by public dancing

A woman filming a public dance routine drew the ire of a Karen in a major Canadian city, and a video of the encounter is making the rounds on Reddit.

The video, though embellished with jokey edits, looks to be the work of Cindywii, a dance choreographer who posts videos of women dancing in varied urban settings.

The dancer in this video is at the Hill Centre Towers in Regina, the capital of the Canadian province of Saskatchewan. She’s executing a routine in front of the oskana ka-asasteki bison statue, a noted piece of public art in Regina.

The video clip, posted to the r/PublicFreakout subreddit on Reddit on Sunday and garnering more than 4,000 comments, shows the Karen coming into the frame with the aid of a walker. She’s instantly disapproving of the dancer’s public display of exuberance.

“What’s going on here?” the Karen asks the dancer. “This is not a burlesque club!”

The Karen zig-zags toward the camera as the dancer continues her routine, staring at the camera operator as she wheels by.

She repeats the burlesque observation, then says, “I’m gonna call the police!”

The Karen mutters off-camera while the dancer continues. The person who embellished the video then added a graphic reading, “Some racist slurs after,” implying that the Karen wasn’t just bothered by the dancing, though the alleged slurs aren’t audible in the clip.

It then concludes with the Karen contending, “It’s illegal to do this!”

That led a number of redditors to laugh at the notion of dancing being illegal. “She must be from the Footloose town,” one commenter observed.

Others applauded the dancer’s resolve, marveling that she performed her routine unabated even as the Karen threatened to involve the police.

“She definitely has more patience with this old bag than I would have,” one commenter observed.

Some expressed pity for the Karen; as one noted, “Imagine your life being so inadequate that you have to ruin someone else’s harmless fun just to feel something.”