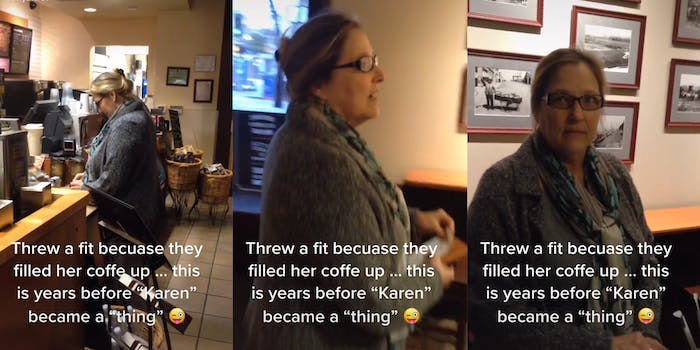 Video: Karen allegedly berates Starbucks worker for filling her coffee up to the top

'I was not ready for the ending but man it was worth it.'

A viral TikTok shows a prototype Karen in action, throwing a fit because Starbucks employees filled her coffee cup to the top.

Filmed and posted by Brooke Wyatt (@bwyatt707), the video has been viewed 4.3 million times. The caption reads: “Inspired by all the Karen videos, I dug deep in my video history for this.”

In the text overlay, Wyatt wrote, “Threw a fit because they filled her coffee up … this is years before ‘Karen’ became a thing.”

The video begins with a contentious providing of a receipt. It’s clear the woman and the Starbucks employee are already at odds. According to the TikToker, the woman was upset that the employee filling her cup to the top.

“And that’s condescending,” says the woman. The Starbucks employee says something not entirely distinguishable except for “a crappy person,” which seems directly aimed at the customer.

“Are you Rachel?” asks the customer. “What is your name? Katie? I’ll be sure to tell Rachel what you said. Or maybe I should just call the corporate office.”

Suddenly, the videographer speaks: “I’ll send them this video because you are such a c*nt.” And the video abruptly ends there, to the delight of several viewers. “I was not ready for the ending but man it was worth it,” one said.

“That was worth the wait,” another said.

After some alleged the video had no context, Wyatt confirmed she recorded the video: “I am the recorder, and she was being an asshole. They were remaking her coffee as she lectured them. It was gross, and that is why I started recording them.”

Wyatt said she confronted the woman by “walking towards her yelling” but ultimately left without further confrontation.

The Daily Dot reached out to Brooke Wyatt.