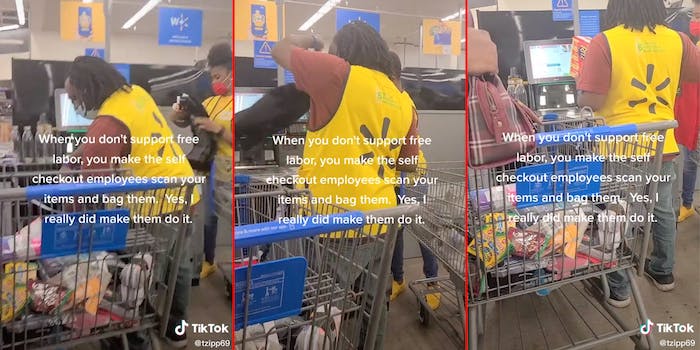 ‘I don’t understand what part of this you’re proud of’: ‘Karen’ makes Walmart employees scan and bag her items in self-checkout

In a viral TikTok video, a woman records Walmart employees scanning and bagging her items at a self-checkout station and calls on her followers to “boycott” Walmart for their lack of cashiers.

“When you don’t support free labor, you make the self-checkout employees scan your items and bag them. Yes I really did make them do it,” the on-screen text reads while in the video, two Walmart employees bag her items in at a self-checkout kiosk.

The woman used the hashtags #createmorejobs and #boycottwalmart. The TikTok, posted on July 28, by Monday had nearly 350,000 views and over 20,000 likes.

In the comments, however, many criticized the woman for forcing the employees to check out and bag her items.

“I don’t understand what part of this you’re proud of,” one user said.

“The entitlement wow. It’s not their job to check you out at self check out,” another said.

Similarly, another user who seems to be a grocery store employee, said that the woman’s entitlement was frustrating.

“It’s no problem for me to do it but the problem comes in when you act like we supposed to when it’s self checkout,” they said.

The woman clarified in response to that user that there were no normal registers open and that she would have used one if they been open.

Some users seconded the woman’s experience, noting that their local Walmarts have few cashiers.

“Walmarts by me only have self checkout and not a single cashier. But there is ‘employees’ standing around ..so good for you!!” said another.

One user questioned why the woman called on viewers to boycott Walmart while having a full cart of items from the store.

“It’s the ‘boycott Walmart’ tag while actively shopping at Walmart for me,” they said.

The woman explained in response that she wants to boycott Walmart because she claims its use of self-checkout kiosks reduces the number of jobs in America.

“That’s why I’m saying boycott Walmart… because they no longer have actual registers, meaning a loss of jobs for Americans,” she commented.

Low-wage workers have quit their jobs at soaring rates and collectively raised the average wage for restaurant and grocery workers to above $15 per hour, according to CNBC.

The Daily Dot has reached out to user @Tzipp69 and Walmart for comment.