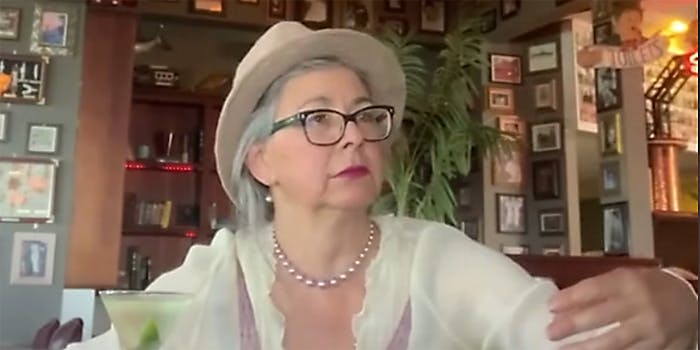 She told him Black women are messing up the country.

A Black man apparently trying to enjoy a nice meal at a restaurant instead found himself subjected to a Karen’s rantings about how Black women are destroying the country and it’s up to Black men like himself to stop them.

Nicholas Wilkerson started recording the interaction, which took place at the Dead Fish in Crockett, California, when it was already underway. The white woman seated alone at the bar nearby doesn’t seem aware that he is recording as she continues going off about Black women without missing a beat.

“The Black male needs to get up and decide to put these Black chicks in their place,” she tells him.

Wilkerson initially plays along, telling her “that’s huge” and trying to get her to reiterate some of whatever she was saying before he turned his camera on.

“You said that Black women are messing with your mom?” he asks.

“The country!” she replies.

The woman starts to continue, but Wilkerson puts her on pause as he orders his food. Rather than use that time to reconsider her life choices, the woman jumps right back to her racist rant as soon as the server leaves them.

“The Black male needs to wrestle the Black female and tell her—put her in her place. Because if you don’t, she is gonna just… She’s just gonna, I don’t know. She’s just gonna…you know…mess it all up,” she rambles.

Wilkerson asks her why she thinks that, but she appears to lose track of the question as she tries to respond, which prompts Wilkerson to decide he’s had enough.

“Yes they are,” the woman insists. “Truly they are.”

He points out that if she’s hating on Black women, she’s hating on his mother, his sister, and his girlfriend, and she manages a “no, no, no,” then a “yes, yes, yes,” before seemingly losing the thread again.

She ultimately slurs something else about how Black women need to be “reigned in” before a server tells Wilkerson another group of patrons has invited him to join them, and he gratefully escapes the situation.

The video was originally posted to Wilkerson’s Facebook last week, where he was praised for maintaining his composure while still pushing back against her misogynoir.

“You better than me, because I would have let her have it!” one person commented.

Some pointed out that “her entitlement is off the charts” to even randomly start a racist conversation with a stranger in the first place, while others noted that the alcohol likely gave her the courage to speak the thoughts she already had while sober.

“The hueless are always nostalgic for a time when they can control black people,” one woman wrote.