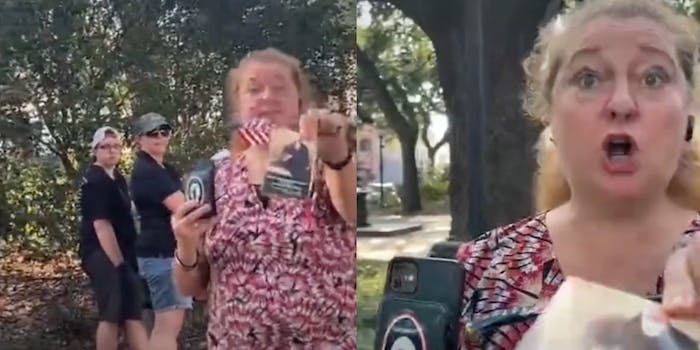 ‘We clearly saw her hit you’: Karen hits Black woman then calls the cops on her

The Karen was upset that she discarded a copy of the Constitution.

A TikTok video has surfaced showing a Karen hitting a Black woman who was live streaming what appears to be a political gathering.

TikToker @kjg.brks, who goes by Keiajah, posted the video earlier this month which has since garnered 2 million views.

The video shows a gathering at a park with one man swaying a huge American flag.

“Man, one Black person out here and they’re talking about the Declaration of Independence,” Keiajah says from behind the camera.

“Ain’t that something?” she continues, as the Karen is seen walking up to her from the crowd.

She is seen holding a booklet in one hand and a tiny American flag in the other.

“This is not indoctrination, it’s a copy of the constitution,” says the Karen to Keiajah, offering her the small book. “This is yours, this is yours.”

“You’re gonna back up out of my face,” Keiajah says to her, while the woman keeps saying “this is yours”, holding out the book at Keiajah. Keiajah takes the booklet from the Karen and tosses it on the ground.

Suddenly, the Karen smacks Keiajah and says, “Don’t do that!” and then runs a few feet from her, trying to pick up the discarded booklet.

The woman comes back up and asks again if Keiajah would like the constitution but as Keiajah talks over her, the woman snaps: “You’re indoctrinated!”

As she walks back to the gathering, Keiajah responds “You’re indoctrinated, stupid!”

In a comment, Keiajah said the incident took place in Savannah, Georgia.

Some people pointed out how the woman hit Keiajah and then tried to play victim—an act that often puts Black people in danger.

“Wait did she say she got hit after we clearly saw her hit you?” wrote one user.

In response to this comment, Keiajah shared that they called the police on her. Once they arrived, they realized they had no grounds for an arrest because the Karen had hit her first.

The Daily Dot has reached out to Keiajah and will update the report if she responds.