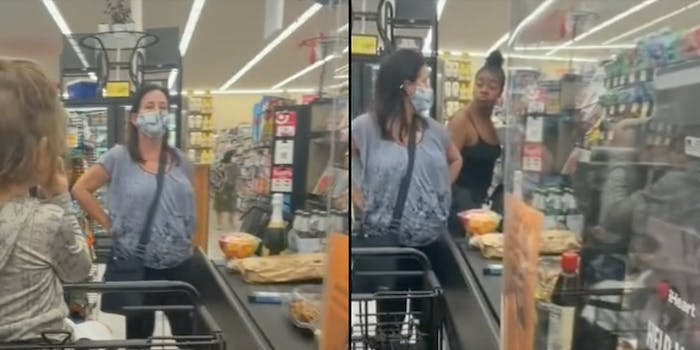 ‘All of these people came to my rescue’: Muslim TikToker films Karen berating her, bystanders sticking up for her

‘I’m posting this to expose a racist.'

In a viral TikTok video, a Muslim woman exposes a white woman who criticized her hijab while in line at a grocery store in Santa Monica. Multiple customers and employees back the TikToker up in the video and confront the white woman about her racist behavior.

“Clearly this lady was angry because I’m Muslim,” the user, @zardanainjali, writes via on-screen text.

She says the white woman asked if she was in line and rolled her eyes at her. The woman then allegedly attempted to put her items on the conveyor belt despite being behind her in the line.

In the video, the woman yells at the TikToker and points at her headscarf, calling her “fucking crazy” and “privileged.”

The TikToker then asks the woman to stay 6 feet away from her son, and the cashier attempts to get her to comply.

“The whole point is to be 6 feet away, and then you wanna be fucking racist,” the TikToker says.

“You’re just being fucking crazy,” the woman says in response, prompting a Black woman in line behind her to confront her. “Don’t talk to her like that,” she says.

“What kills me the most was my son was witnessing his mother get verbally abused by a racist,” the TikToker writes in on-screen text. “I’m posting this to expose a racist.”

“Can I ask you why you hate me just because I’m wearing a headscarf?” @zardanainjali says, adding via text that she thought she could change the woman’s mindset by talking to her.

“I don’t know why you hate me,” @zardanainjali responds. “I didn’t do anything to you.”

In another clip, the TikToker films multiple employees and customers attempting to help her with the situation.

“All of these people came to my rescue they stood up to her and this moment proved to me that humanity is great,” the text reads. She calls them “heroes.”

“I’m so embarrassed for breaking down and crying but no child should see their mom being attacked,” @zardanainjali says via on-screen text.

The rest of the video features multiple people yelling over one another, while another Black woman confronts the woman, saying that she’s racially profiling the TikToker.

In a followup video, the TikToker says the woman and the cashier helped her from the beginning. She also says a couple offered to walk her to her car.

“I want you guys to find them, I want you to blow up their page, and give them all the love and support you can,” she says.

The TikToker says in another followup video that the woman was eventually escorted out. “For me, that was like justice was served. … Believe me, I’m not scared of Karens like this,” she says.

“Thanks to you #Karen i’m going to wear my #hijab loud and #proud,” @zardanainjali captioned the viral TikTok video, which has received over 750,000 views since being posted on July 25.

Many viewers in the comments section of the video were appalled at the woman’s reaction to the TikToker’s hijab.

“They got no problem if a woman has a hat, hoodie, or anything else covering her hair, but the second it’s a hijab all of a sudden it’s unacceptable,” one said.

“Why do these Karen’s think and believe that a hijab is contagious and that wearing one means you’re trying to convert them or force them to wear it ?” another commented.

There were also calls to action to find the Karen in question.

“TIKTOKERS, DO YOUR THING, FIND HER,” one user said.

“Yes please find her please,” the user seconded in the comments.

Others praised the bystanders who helped @zardanainjali confront the woman.

“Black queens be like we’ve been dealing with this for hundreds of years. We got this,” one user said.

“I love how everyone came to defend her. So many times people ignore it and leave hijabis to fend for themselves,” another wrote.

The Daily Dot has reached out to @zardanainjali for comment.