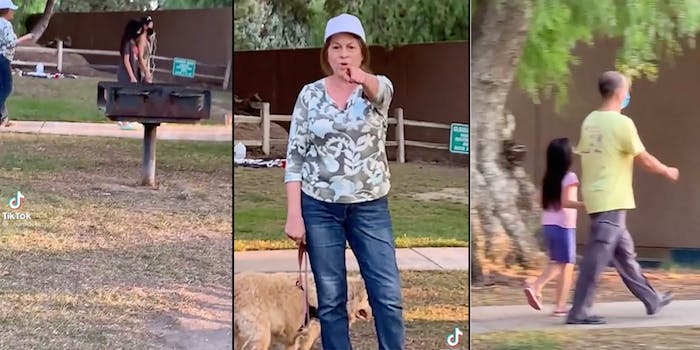 ‘No one’s gangstalking’: Karen harasses Asian family in park, guy steps in to help—then he name-checks Public Freakout on video

A Karen harassing an Asian family in a park, and then being confronted by other park visitors for her behavior, was captured in a viral video posted Saturday.

The TikTok video, originally shared by user @_numlock, has been since shared to r/PublicFreakout, a Reddit subreddit “dedicated to people freaking out, melting down, losing their cool, or being weird in public.” It’s home to a significant number of Karen videos, and the end of the TikTok actually name-checks the subreddit.

The TikToker reports that it took place in Orange County, and it’s hashtagged with #oc, used by other TikTokers in the largely-suburban California county between Los Angeles and San Diego.

It starts abruptly with the Karen, walking a dog, following and pointing at the group of Asian people, who are all wearing masks. (The Karen, unsurprisingly, is not wearing a mask.) Though it appears she’s yelling something at them, it’s inaudible.

Then a female voice chimes in, “There’s no reason to follow them with a baby! They have a kid!”

The video then fixes on the Karen, who points toward the camera and demands, “Hey, woman, go back to your corner.”

There’s then an edit, and the person recording the incident has moved closer to the Karen. The person confronting the Karen can be partially seen in the foreground during the remainder of the video.

“Are you done?” she asks the Karen.

“Are you done?” the Karen retorts.

The person confronting the Karen then says, of the Asian family, “I will protect them at all costs; I need you to walk away.”

The Karen makes an accusation of “gangstalking,” and the person confronting her retorts, “No one’s gangstalking,” before the person filming —who her companion referenced as her boyfriend earlier in the exchange, contributes.

“Ha! Gangstalking,” he says, before starting to say the r/PublicFreakout URL as the video abruptly ends.

An October 2020 article in Psychology Today notes, “Reports of ‘gang stalking’ (a.k.a. ‘gang-stalking’ or ‘gangstalking’) began emerging at least 15 years ago by self-described “targeted individuals” (“T.I.s”) claiming to be followed, surveilled, harassed, and otherwise victimized by unknown forces wielding high-tech weapons of ‘mind control.’ Since then, much more has been written about this phenomenon, especially over the past few years, with national attention devoted to a few notable cases of violence and mass shootings perpetrated by people identifying as T.I.s.”

In addition to commenters on r/PublicFreakout feeling validated by the shout-out, the “gangstalking” comment caught their attention.

“Funny enough gangstalking is the paranoid belief that you’re being followed by a group or organization for conspiratorial reasons,” one commenter noted. “Like crazy people that believe the shadowy cabal is following them because they accidentally stumbled upon the Secret Krabby Patty Formula. They’re too dangerous to be kept alive!”

Others praised the person who confronted the Karen, with one commenter saying, “Thanks for stepping up and defending that family. Much respect.”

And one marveled at the Karen’s dedication, observing, “I don’t understand how people have time in their day to do this,” adding, “I have to squeeze a walk in between other stuff; I’m not wasting it being a racist asshole.”