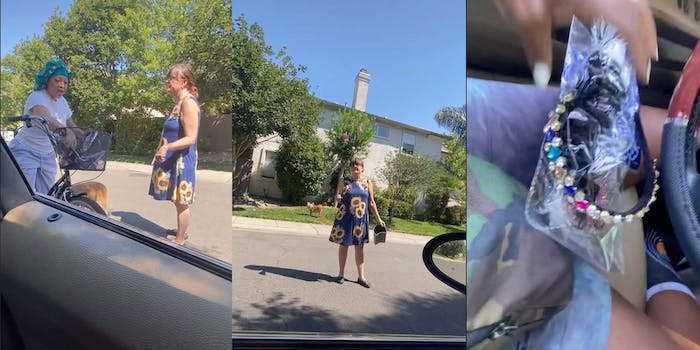 'People are talking about the girl on the bike that's dealing drugs.'

In a TikTok video posted on July 22, a white woman tells a Black woman who is dropping off hair extensions that it looks like she’s conducting a drug deal. The Black woman has identified herself as Ronnie Marie of Marie’s Luxury Hair Extensions.

“It looks like a drug deal,” the white woman says to Marie, who is on a bike and just delivered a product to a customer. The is the one filming from their vehicle.

“I don’t care what it looks like,” says Marie in response to the white woman’s accusations.

The white woman goes on to tell Marie that she’s giving her a “heads up” because other people in the neighborhood have been getting suspicious.

“People are talking about the girl on the bike that’s dealing drugs,” says the white woman to Marie.

In a later video, Marie says that the video was taken in June by the client who was picking up hair extensions from her.

“Karen was harassing me in my community,” Marie says in the video. She also posted a video that was taken shortly after the interaction with the white woman explaining the situation.

The Daily Dot has reached out to Ronnie Marie and the customer who filmed the interaction.