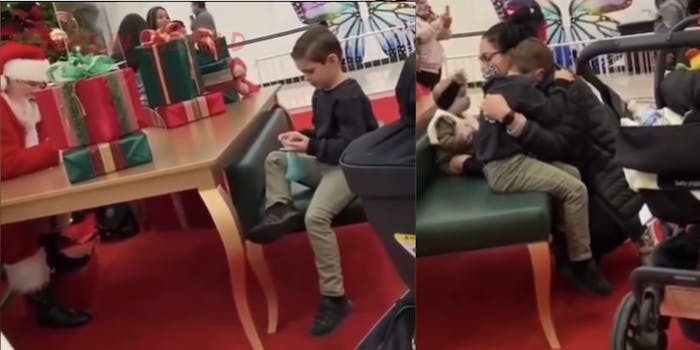 A video of a mall Santa refusing to gift a Nerf gun to a 4-year-old is going viral on social media as viewers are calling the Santa out for their attitude toward the child and dubbing them a “Karen Claus.”

In the video, a young boy approaches a mall Santa and asks for a Nerf gun for Christmas. “Nope, no guns,” the Santa replies. “Not even a Nerf gun. If your dad wants to give it to you, that’s fine. But I can’t bring it to you.”

The child looks obviously upset by the news, and Santa starts suggesting other gifts he can ask for instead. Santa suggests Legos, bicycles, and firetrucks, none of which interested the boy. When Santa asks, “What do you think?” the child starts to cry.

The video was posted to the “Fuck You Karen” subreddit with the caption, “You know you’re in 2020 when Santa becomes a Karen.” Viewers are appalled by Santa’s behavior and feel sorry for the young boy, Michael, who couldn’t get a Nerf gun.

“’Karen Claus is coming to’ DESTROY ALL YOUR KIDS’ HOPES AND DREAMS,” one commenter wrote on YouTube, where the video was initially posted.

“Karen Santa? This must be Hell on Earth,” another user wrote.

The video reminded many of the Red Ryder BB gun from A Christmas Story. “This is literally A Christmas Story all over again. I was surprised that Santa didn’t say ‘You’ll shoot your eye out!'” one user said.

The mall where the incident took place attempted to set things right for Michael. The Harlem Irving Plaza Mall in Illinois sent another Santa to Michael’s house with a brand new Nerf gun for Christmas, according to KTVU.

After the incident went viral, many viewers asked if they could send Michael a Nerf gun. Michael’s mother, Sabella DeCarlo, said she is organizing a toy drive for anyone who wanted to send a gift to Michael.

And as for the original mall Santa, they resigned. Harlem Irving Plaza told its other mall Santas not to “impose personal opinions” on the children.