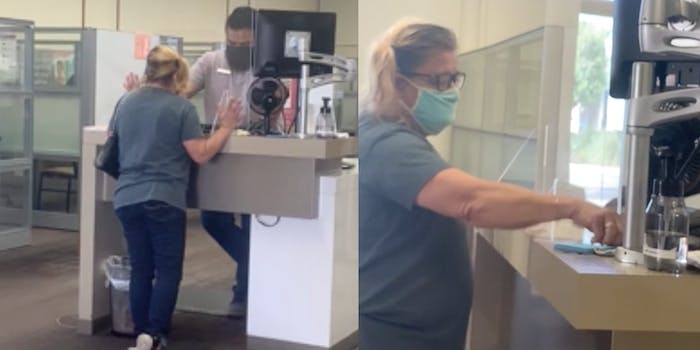 Haven't we all been 'fed up' with customer service?

A video that has gone viral shows a woman dubbed a “Karen” having a meltdown over having to change her password at a Bank of America. But counter to the usual Karen narrative, many are sympathizing with her frustration over password rules.

The video shows the woman yelling at a bank teller, whose words are inaudible for most of the video.

“It’s absolutely ridiculous,” the woman says. “I’m not changing my password … I dont have another password that I can choose that I would remember.”

After the teller responds, she says, “I’m not writing that down, I shouldn’t have to write it down, I know my password.

She goes on to say that she “guarantees” whatever the password change is, it’s going to be “set back.”

“I understand your frustration,” the teller replies.

“You do not understand my frustration,” she says as the camera zooms in closer to the booth where she’s standing.

The user who took the video shared in the thread that the woman was rude to other customers.

“She proceeded to tell the guy in front of me that she was in line before him, went to sit down, then when the line moved to ‘her’ place, she jumped up and cut back in line again,” the user wrote.

Many found Karen’s behavior problematic, especially her use of the word “retard” in a derogatory way and her yelling at a bank teller who likely has little control over the situation.

“Cussing a staff member out and shouting isn’t conducive to a productive problem-solving situation,” wrote the user who posted the video.

“As someone who works for a banking call center, I feel this mans pain,” another user wrote. “People will call me and say ‘so the website says I’m using an incorrect password’ and then I suggest that i can walk them through changing the password they will SCREAM about how they know their password and used it before and how there has to be another way.”

But many could relate to the woman’s frustration.

“I am not saying she’s right but I get it man. It’s pretty crappy to have to remember a ton of passwords,” wrote one user.

“Make fun of her all you want, but i feel her pain,” wrote another user. “One day when y’all have to go through this, and you are denied access to your funds, you would probably be more pissed off than her.”

According to Forbes, U.S. digital banking users jumped from 26% to 51% between 2012 and 2017. Meanwhile, the number of physical banks declined by more than 1,500 between 2019 and 2020, per American Banker, leaving behind older customers who may feel less comfortable with managing their finances digitally.

It’s not clear from the video which branch of the bank the incident took place in, or what the policies are regarding video recording. There are no industry-wide rules about videotaping inside a bank, according to the American Bankers Association journal, but it does remain a widespread security concern for many financial establishments.