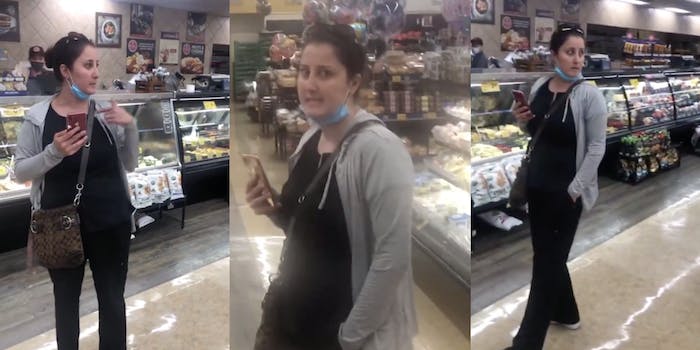 Shoppers band together to shame anti-mask Karen in grocery store

They call her a 'Karen' right to her face.

A woman was publicly shamed in a grocery store by several people and called a Karen right to her should-be-wearing-a-mask-but-refuses-to face.

Ironically, in a video of the incident, she has one of those disposable blue masks just chilling around her neck.

“Why does she have a mask around her neck, possibly indicating that there are situations where she does wear it? Makes no sense,” pointed out one user on Twitter, where the video was posted.

The video was uploaded by @davenewworld_2 with the caption: “Anti-masker with a ‘medical clearance’ gets shamed by customers in Los Angeles.” The two-minute clip has been video more than 20,000 times on the app.

One customer, who was recording and let her know as such, told the woman that it’s against the law to not wear a mask, to which she responds: “It’s against the law to prohibit me from getting some fresh air. I have a medical condition. Get your camera out my face because I have you on camera, too.”

The woman proceeds to curtly ask the employees, “Can I just get my lil salad and leave? You’re making this into a bigger deal than it needs to be.” She also yells at a customer to “get your camera off my face.”

The person filming the video clip implies that someone should call security or the police on the woman, but that doesn’t seem to happen.

The employees tell her that they’re not sure what the law is about medical exceptions, that they don’t appreciate her yelling at them or customers. They tell her to go talk to their manager at the front of the store.

By the end of the video clip, there are about three customers around her telling her she has to wear a mask, at least two of them are recording the incident. At one point she, still unmasked, gets all up in the camera of one customer, completely disregarding social distancing.

But eventually she leaves to go talk to the manager at the front of the store.

“Wow. So entitled,” the person filming says, summing up the whole ordeal.