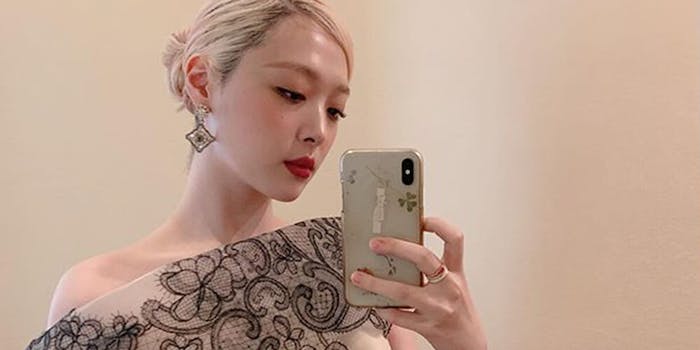 Sulli, K-pop star who spoke against cyberbullying, dead at 25

Police said they suspect her death was a suicide.

Popular K-pop star and former child actress Sulli has died in what authorities suspect was a suicide, TMZ reports. She was 25.

Sulli, whose real name is Choi Jin-ri, was found in her apartment by her manager in Seoul, Korea, on Monday. Sulli lived alone, and police said they didn’t find any signs of foul play, according to TMZ.

“We will leave all possibilities open and investigate,” a police official said, according to CNN.

Sulli, a former child actress, was best known for her work with the band f(x), which she left in 2015 after nearly six years. In 2014, she took a break owing to health concerns, according to TMZ. When she left the group for good in 2015, she was headed toward her career as a solo artist.

She was outspoken about matters of cyberbullying, especially after she suffered from online attacks and rumors in 2014. In June, she became a co-host of a talk show called The Night of Hate Comments in which celebrities share unpleasant comments they’ve received.

On June 29, Sulli released a song called “Goblin” that has racked up 3 million views on YouTube. The song is prefaced with an introduction, “This is a story about a person with a dissociative disorder. She is with herself and with three other personalities.”

Last year, Sulli spoke openly about her mental health struggles and said she suffered from “panic disorder” and “social phobia,” the South China Morning Post reported at the time.

On social media, Sulli’s fans shared sadness over her death, and some expressed their anger over the bullies. In her last photo on her Instagram account, one fan wrote, “BULLYING is NOT cool man, fuck every ‘hate comments’ that kill our Sulli. Rest in peace.”