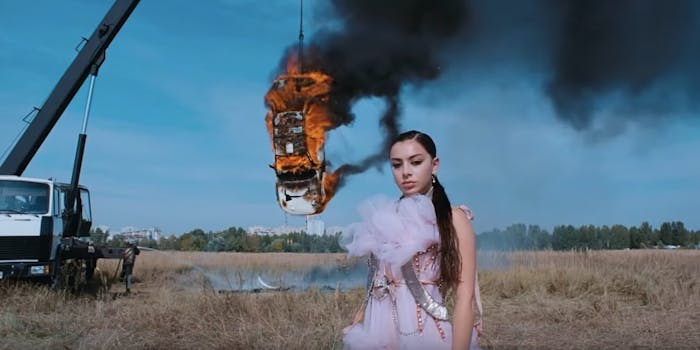 The singer has since denied the accusations.

Charli XCX clarified the environmental impact of her latest music video for her song “White Mercedes” after being accused of polluting the air.

In the video, the singer is seen standing in a giant field, with a dangling white car burning behind her.

And though fans seemed to love the song and music video, many were worried that the burning of the car would pollute the air.

“Charli sweetie, global warming is a real thing,” one commented.

Others dubbed her the “queen of polluting the air” and “queen of climate change.”

Charli XCX denied the accusations in a statement released on Twitter.

“Hi guys, I’m seeing the comments about air pollution and the White Mercedes video. Just so everyone is aware the black smoke and heavy fire is made by special effect liquid they use for cinema. The car itself was completely emptied of all its oil and toxic liquids. Even the white paint we put on the car was organic and made for easy removal. Just wanted to let you know,” Charli XCX wrote on Friday.

💓 just so u know 💓 pic.twitter.com/klqtWmhQXa

However, it seems more fans noticed that none of the cars in “White Mercedes” were actual Mercedes’.

“White Mitsubishi” clearly doesn’t have the same ring to it,” one user said.

“I like how there is no Mercedes-Benz in the actual mv,” another commented.

Others believe it just solidifies Charli XCX’s status as a “gay icon.”

“She’s such a gay icon she doesn’t even know what a Mercedes looks like we stan,” one user said.

“The fact that these cars aren’t even Mercedes… we stan a queen who knows her audience. she knew the gays wouldn’t notice,” another wrote.

Either way, it’s good to know that no air or white Mercedes’ were hurt in the making of the video.