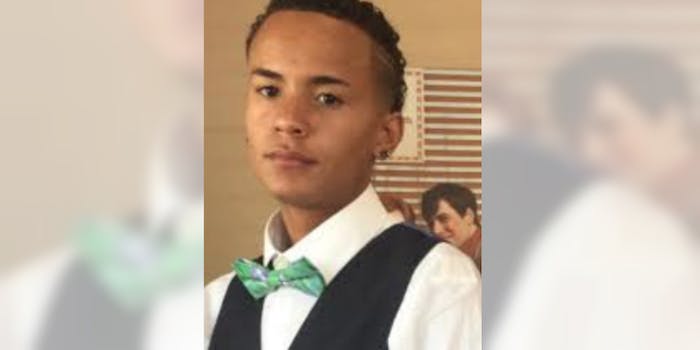 He claims the rap music made him feel 'unsafe.'

On July 4, a white man killed a Black 17-year-old named Elijah Al-Amin by slitting his throat. He said he felt threatened by the rap music Al-Amin was playing.

Now people are demanding justice with the #JusticeForElijah hashtag.

I want Elijah el-Amin's picture everywhere. This is who you fail when you defend anything like what we saw from the right this past weekend. #JusticeForElijah pic.twitter.com/nbzNDD7FsS

According to AZ Central, Al-Amin was listening to rap music while parked in his car at a convenience store parking lot in Peoria, Arizona. Michael Adams, the 27-year-old alleged killer, heard the music and later told police that it made him feel “unsafe.” Adams also said people who listen to rap music are a threat to the community, so he decided to be “proactive rather than reactive.”

Surveillance footage shows that Adams followed Al-Amin into the convenience store and lunged at him with a pocketknife, stabbing him in the back and slitting his throat. Al-Amin ran out of the store before collapsing under a gas station canopy. Police began CPR, and Al-Amin was taken to a hospital, where he died at 2:05am.

People were outraged upon hearing of the crime.

If my music makes you feel unsafe, then walk the fuck away. #JusticeForElijah

This is horrific. We must call this what it is — a hate crime — and demand a thorough investigation at the highest level. #JusticeForElijah https://t.co/L9F1GSlaq9

Meanwhile, a statement from Bill Lamoreaux, a spokesman from the Arizona Department of Corrections, stated that Adams was “not designated seriously mentally ill.”

People aren’t buying the “mentally ill” defense and want it to be called a hate crime.

Young black teens are being murdered in the US for wearing hoodies, playing with toys, listening to rap music, standing outside a store. This is a racial issue, not a mental health issue. These people are white supremacists and terrorists. Tired of this shit. #JusticeForElijah

Every time a Black man kills he's a thug. Every time a White man kills he's 'mentally ill'. STOP! This man slit a young boys throat over nothing but bigotry! These parents lost their little boy! This is who we are! Send him away for life!#JusticeForElijah

Adams was charged with first-degree murder and is being held in a Maricopa County jail on a $1 million bond. His preliminary hearing is scheduled for July 15.