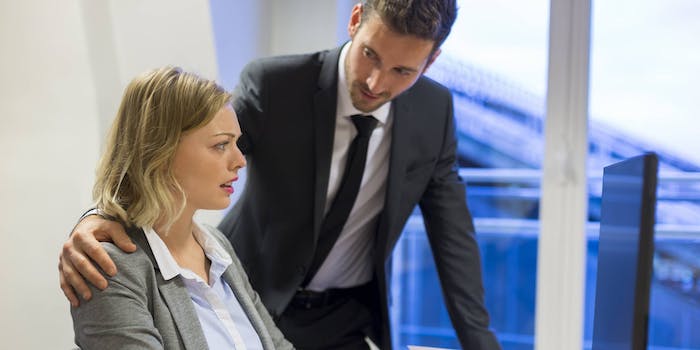 Justice has been served.

It is a truth universally acknowledged that a working woman will eventually face some form of inappropriate sexual behavior. But instead of sucking it up as women have been trained to do, one journalist exposed her harasser in a Twitter thread and had him suspended by his employer in a matter of hours—inspiring other women to share numerous similar accounts.

After his repeated messages, she told him they were neither “appropriate” nor “acceptable.” He apologized and requested that she not expose him as it would “devastate” his wife, according to screenshots she shared in the thread. He explained that he’d been meaning to send that message to someone else, but as Jane pointed out in one of her later tweets, he had ample time to figure out he was sending the messages.

In a subsequent conversation, which Jane documented in the thread through screenshots, she asked him to get rid of Twitter account so that he doesn’t continue his predatory behavior. He said that would get him fired and end his career, which are often the consequences women suffer when they don’t reciprocate men’s advances. When she asked him to acknowledge publicly that he’s the one who sent those tweets, he instead chose to deactivate his account.

She also wrote an email to his Seattle Times editors. “I am bringing this information to your attention because the media landscape is filled with men who abuse their platforms to engage in predatory sexual harassment with less established voices,” she wrote. “This behavior routinely discourages women and marginalized voices from entering the field and sets a precedent for other men to follow suit.”

When reached on the phone by Crosscut, Rosenberg confirmed he had sent those messages and wasn’t comfortable discussing who they were actually for. Shelton, when contacted by Crosscut, did not say if Rosenberg’s suspension was with or without pay.

Needless to say, the thread inspired many women to share similar accounts on their jobs. According to a 2018 Columbia Journalism Review survey of about 300 journalists, 41% said they’d been sexually harassed on the job, and only a third of them had reported their incident. But these accounts shared on Twitter show that most women will face such harassment numerous times over the course of their careers. Many responded to Harper’s Bazaar editor Jennifer Wright’s call to share similar anecdotes:

Worked at an architecture firm & one of the senior arch’s wanted me to stay & drink when others left HH to go home, told him no bc I didn’t want to drive drunk so he invited me to stay at the company condo w/ him so we could tie one on. Noped out of there QUICK & found a new job

Too many times, but the worst was when a recruiter I had a screener interview with used my personal information to later contact me and ask me out pic.twitter.com/VlvHiB5sNx

So many times! Worst was a Boeing middle mgr who wrote wondering how sensitive my breasts were. This after I'd already said he was being inappropriate & leave me alone. His "apology" was to panic about how it would ruin him. No concern for how his behavior affected me, of course.

I worked in construction and the owner showed up one day and asked if I wanted to go to dinner, I was under the impression this was a company dinner (I was 19 he was like 50) show up and it’s just us and he had already gotten a hotel room reserved. I was gone in about 2 seconds

I work in a fairly male-dominated industry and this has happened to me multiple times. Sadly I didn’t have the strength to report it and hate that the same behavior likely was done to others after me.

Every single job I have ever had and that includes back when I was a 13yo waitress.

Many women said they’ve had to use the “boyfriend excuse” to get out of harassing behavior.

Women have also heard harassers give the “oops, it was an accident” excuse after getting called out, too.

I was supposed to show him a house for sale and he started sending me several nudes. I promptly told him I couldn’t work with him, he said it was an “accident” and still tried to get me to meet him! If I accidentally sent nudes I wouldn’t want to meet the receiver EVER.

A senior partner asked me to "lunch" – except instead walked me down to Millennium Park & asked me to take my shoes off & put my feet in the fountain. His request turned into a demand & when I still refused he took me back to the office without so much as buying me a corn dog

At the core of the conversation is how normalized such behavior is for men who have gotten away with it for so long. As @tragedythyme points out in her account, sometimes these “jokes” and advances are blurred with professional behavior such as “lunch” or done in a manner that might not be explicitly scary or creepy, and it doesn’t force women out of their jobs or careers. But sometimes, women do end up facing repercussions for not entertaining these advances.

I’ve left jobs without notice and stopped working industries where this was rampant.

I’ve left jobs without notice and stopped working industries where this was rampant.

Several times by the same boss, who eventually stopped giving me freelance work when I was’t receptive.

Some women have left their professions entirely to avoid predators. Which is an important reminder to the many who are defending Rosenberg and sending Jane messages that she didn’t need to end his career which, by the way, she wasn’t planning on, as she stated in an email to the Seattle Times editor. For the time, Rosenberg has been suspended.

In the end, Jane has received much more applause than derision for her approach to shaming Rosenberg for his behavior. By outing and humiliating him, Jane has shifted the shame where it belongs: to the perpetrator.

(Neither Jane nor Rosenberg immediately responded to the Daily Dot’s request for comment.)