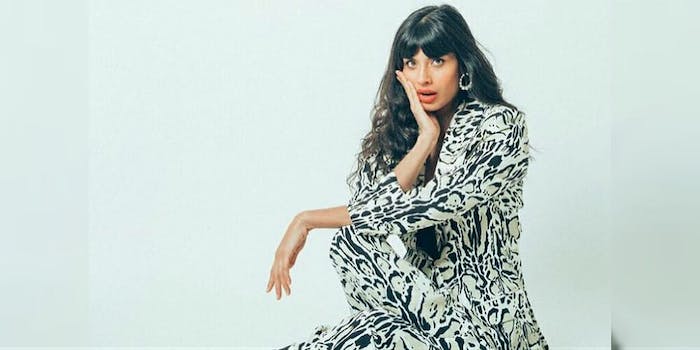 The actress says she was once punched in the face by a man for rejecting him.

Most women and femmes have had the experience of being harassed or intimidated by a random man on the street. On Sunday, The Good Place star Jameela Jamil shared her latest experience, sparking a conversation about how street harassers handle rejection and what victims believe they have to say to keep themselves safe.

“Was out at the shops with my friend. Man ogles me. Man then approaches me to give me his number,” tweeted Jamil. “I explain I have a boyfriend but thank him for the offer. Man then threatens my career, saying I better remember that I rejected him. And then Shouts at me that I’m low class…,” she finished her tweet with a shrugging emoji and followed it with another tweet, “Let a bitch live.”

A 2014 study commissioned by the organization Stop Street Harassment found that 65 percent of women had experienced some form of sexual harassment on the street, and 41 percent of women had experienced physically aggressive harassment. With these numbers in mind, it’s no surprise that there was an outpouring of similar stories from other women on Twitter.

It starts in high school – I remember a kid going from “Girl can I holler at you” to “You’re not even cute” when I rejected said hollering. I was plenty cute five seconds ago. Asshat.

Some folks pointed out how gross it feels to have to tell a guy that you have a man in your life so he’ll leave you alone, knowing that he’ll respond better to respecting another man’s “property,” instead of simply respecting women.

I once had a guy come up to me on the street and say, “I hope your husband or boyfriend doesn’t mind me talking to you.” I wanted to be like, “Motherfucker, what if I MIND YOU TALKING TO ME?!”

Jamil weighed in on that too, telling the story of what happened when she didn’t have an excuse. “I once said no thank you to a man when I was 19 and didn’t have an excuse… and he punched me in the face,” she tweeted. “After that whether or not I have a boyfriend, I say I do.”

In the replies, women also shared their experiences of violence at the hands of men they rejected.

One pulled a knife on me, because my answer was ‘no, thank you’. Surprisingly, that didn’t change my mind, so he stabbed my handbag, and I punched him in the face.

Later, Jamil retweeted her thread, asking people to read the replies and take in the stories from these women. “Let this be an education to everyone out there about our experience as the disrespected/disregarded gender,” she wrote.