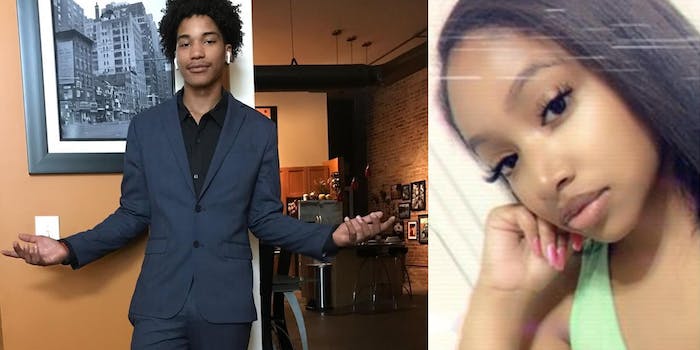 Jordyn Jones and her boyfriend are now suspects in her friend and roommate's murder.

Jordyn Jones, 21, allegedly posted the missing flyer of her roommate and friend–who was missing at the time–on Instagram. Jones is now one of the two suspects in her murder.

Alexis Crawford, 21, a student at Clark Atlanta University in Atlanta, Georgia, went missing on Oct. 30. At the time, Jones, also a student at the university, said the last time she saw Crawford was that night during a trip to the liquor store and then back at their apartment.

Atlanta Police Chief Erika Shields said at a press conference Friday that one of the suspects–Jones or her boyfriend Barron Brantley, 21–led police to Crawford’s body in a DeKalb County park.

Crawford’s cause of death was determined to be asphyxiation by a medical examiner, according to a police statement on Saturday.

According to Fulton County jail records, Brantley has prior arrests, including for battery, cruelty to children, robbery, and reckless driving.

Police have not yet announced an official motive for the murder. According to Shields, Jones filed a sexual assault report against Brantley for “unwanted kissing and touching” on Oct. 27–three days before her disappearance–with the police department.

Before Jones’ body was found, Jones allegedly posted about her disappearance on Instagram.

Michael Seiden, a reporter for WSBTV, tweeted that a police source sent him a screenshot of one of Jones’ Instagram stories. In the story, Jones wrote that “this is obviously a very difficult time for me right now and I just feel helpless… my heart is really hurting rn.”

“The fact that y’all are telling everybody to blow my DMs up is beyond childish… how bout y’all put that same energy … into finding my friend,” Jones allegedly wrote. 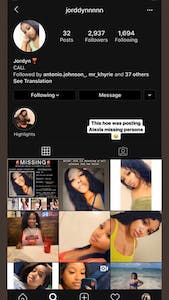 A police source just sent me this screen grab of an IG story; itspeaks for itself . Hours later, police charged Jordyn Jones and Barron Brantley for their roles in the murder of Alexis Crawford. pic.twitter.com/DMBU33twls

this is Alexis Crawford's roomate. the one who confessed to the location of her body. the one who posted awareness photos of Alexis's disappearance. the one who shared a living space with Alexis. this world is so cold it doesn't make sense. pic.twitter.com/DE8zYJc4jN

I can’t wait to see Jordyn Jones (circled) plead her pathetic case from prison while watching Alexis Crawford’s documentary in a few years. She really murdered that girl then had the nerve to post her missing flyer all over Instagram. SICKENING https://t.co/jN5uR0lLFh

Crawford and Jones were reportedly “two peas in a pod,” and Jones had even spent the holidays at Crawford’s home with her family.

Since news broke of Jones’ alleged involvement, people have expressed their anger on social media, especially on Jones’ Twitter account, which is still public–and, even more so on Jones’ pinned tweet, which was written on her 21st birthday in 2018.

“You Know there’s A special Place In hell for u right,” one user wrote on a post from Oct. 13. “You gone be lit in Hell,” another wrote on a different post.

A vigil was held for Crawford on Sunday.