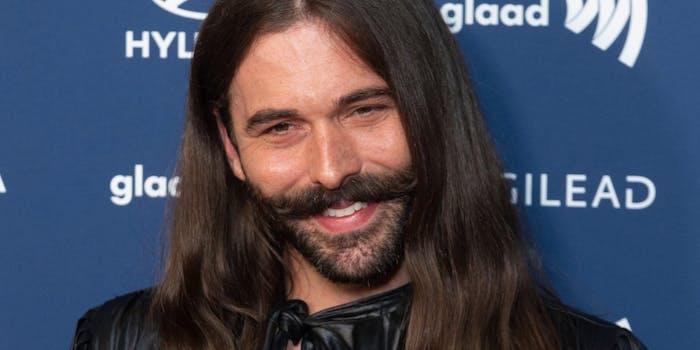 The 'Queer Eye' star responded to critics saying his comments were meant to be tongue-in-cheek and not taken so seriously.

Queer Eye star Jonathan Van Ness responded to backlash on Twitter this morning over past comments on how President Ronald Reagan handled the HIV/AIDS epidemic. Van Ness tweeted saying his comments were meant to be a “tongue [in] cheek” joke.

The “Fab Five” cast members were discussing Bernie Sanders’ style in an old interview with Into magazine when Van Ness said, “And Ronald Reagan, could he be bothered to mention HIV/AIDS? No. But he could be bothered to put some gel in his hair.”

For y’all bringing this video up. These are tongue & cheek and meant to not be taken so seriously. I bring up Reagan’s inaction on HIV/AIDS and as a comedian I do joke sometimes. This video is almost 2 years old and again a joke. https://t.co/PWPjAcakDL

The video is making the rounds on Twitter as fans are voicing their disappointment with Van Ness, who has a huge influence in the LGBTQ+ community and in pop culture as a whole. Many feel the Netflix star was downplaying the danger of the AIDS epidemic and Reagan’s policies overall. His commentary was even dubbed “the saddest encapsulation of queer assimilation” on Twitter by user P.E. Moskowitz.

"ronald reagan may have murdered people with aids, but at least he wore good suits" is the best/saddest encapsulation of gay assimilation ive ever seen https://t.co/aLdeQXiwJg

But just as many fans recognize Van Ness was joking and aren’t taking his commentary too seriously. Van Ness recently announced that he is HIV positive and was met with widespread love and acceptance for destigmatizing HIV. While discussing his new memoir, Over the Top: A Raw Journey to Self-Love, in an interview with the New York Times, he said:

“When ‘Queer Eye’ came out, it was really difficult because I was like, ‘Do I want to talk about my status?’… The Trump administration has done everything they can do to have the stigmatization of the L.G.B.T. community thrive around me. I do feel the need to talk about this.”

Watch @jvn's full interview with @hodakotb about his HIV diagnosis, passion for the Olympics and more. pic.twitter.com/DYkaH2DFgt

He also tweeted that he’d support Sanders for president should he win the nomination.

The Daily Dot has reached out to Van Ness for comment.