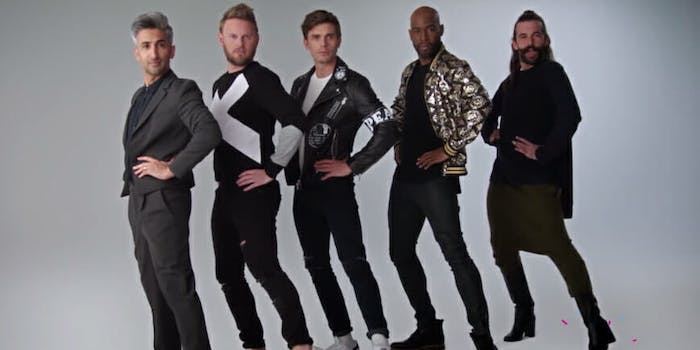 French tuck that shirt in and get your guacamole ready.

French tuck that shirt in and get your guacamole ready, because Netflix just renewed Queer Eye for a fourth and fifth season.

Season four of the Emmy-winning show takes place in Kansas City, Kansas, and is slated for a July 19 premiere date. Season five will begin production in Philadelphia, Pennsylvania, on June 24–with a premiere date set for some time in 2020.

Most recently, the group starred in Taylor Swift’s new music video “You Need to Calm Down.” They will also have their own float in New York City’s Pride parade.

Berk recently told Page Six about the importance of the Queer Eye reboot and the legacy he hopes it leaves for this generation.

“We want people to realize that gays are just like everybody else,” he said. “We also wanted to show people that we weren’t coming to pick you apart, we’re coming in to show you everything that’s great about you that you didn’t see and help you to learn about yourself and love yourself more.”