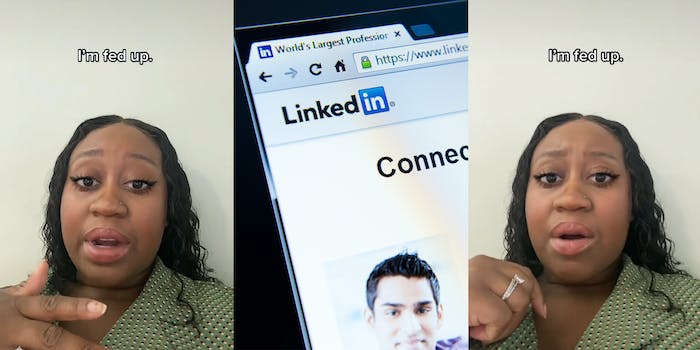 ‘This is the second interview this week that’s been nonexistent’: TikToker calls out interview scams via LinkedIn job listings

'Are you telling me you faked this entire thing so I could download some noise-canceling software for free?'

In her video, user AyJay (@ayjaydajuicemane) claims she had scheduled an interview with a company after applying for a job through a LinkedIn job listing—but there was no interview.

After she received an email to schedule an interview through Calendly, the TikToker says there was one thing that seemed off.

“It had, like, a step 1 and 2. And step 1 was I had to download a noise-canceling software,” AyJay claims.

Before she downloaded the software, she researched the software to see if it was legit. The TikToker noted in the comments that the software is called Krisp. However, she experienced no issues there.

“It was fine,” she adds. “I downloaded it. It was noise canceling.”

But when the interview time came, AyJay says there was no way to dial into a call and her emails to the purported company wouldn’t go through. After spending time preparing for the interview, she claims it was a scam.

“And I’m looking for a link to dial in and nothing. I send an email, failed. Are you telling me you faked this entire thing so i could download some noise-canceling software for free?” she says. “Now I’m pissed. This is the second interview this week that’s been nonexistent.”

Her video has received over 51,000 views as of Friday.

According to a recent blog post from LinkedIn, the company uses automated defenses like artificial intelligence to halt fraudulent content before it goes live on the site. A transparency report regarding activity from July 2021 to December 2021 claims that these preventative measures detect 96% of fake accounts and 99.1% of spam messages and scams.

Although AyJay doesn’t mention the company in the video, she claims in the comments that the company was “supposedly” Comtech Telecommunications.

Many viewers expressed their support for AyJay, some even shared the same experience as her.

“Several ‘recruiters’ on LinkedIn have asked me to send resume, once I do that, the conversation ends there. I don’t know if that’s some sort of a scam,” one person wrote.

“I’ve been getting scams too. ‘Interviews’ that are MLM sales pitches…moving forward in a process that ain’t real…the job hunt is the ghetto,” another person commented.

“I’ve gotten an email for an interview for a local insurance agent. Long story short it was a seminar that she was selling for $250. Wasted my time,” a third said.

“This happened to me except instead of software to download they wanted me to fill out a form with my social security #… BEFORE interview scheduling,” a fourth said.