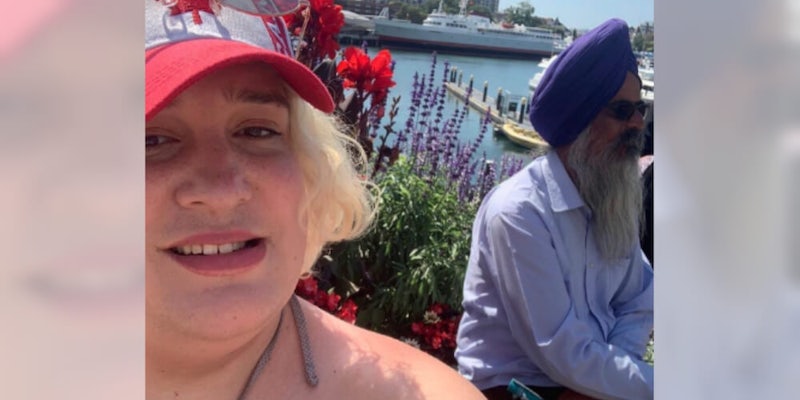 Yaniv says she was joking and that an imposter in the group chat leaked the messages.

In July, she went viral for filing human rights complaints against various aestheticians after they refused her “gender affirming” services, which included them giving her a Brazilian wax.

In August, Yaniv appeared in a heated debate with YouTuber Blaire White, who called her out for allegedly trying to force women to touch her private parts and also sending inappropriate messages to underage girls. Screenshots of the messages–some sent to young girls–have since been making rounds online. And at least one woman has come forward, alleging Yaniv engaged in inappropriate conversations with her when she was 14 and 15 years old.

In August, Yaniv tried to host a pool party for both underage girls and women, aged 12-24, where parents would be restricted and toplessness permitted. People have called Yaniv terrible, abusive, and predatory–some even going as far to say that she isn’t really trans but just using a trans woman’s identity in order to gain access to young girls. Others have called for her arrest for doxing White by posting her private information after their heated discussion.

Now it seems Yaniv is back in hot water, this time facing accusations of racism. A screenshot of a chat–between Yaniv and her “friends”–has been circulating on social media, in which Yaniv allegedly called a Sikh man a “turban fucker.”

Woman sits next to Sikh man.

In the chat, Yaniv writes, “Sitting right next to a turban fucker.” An unidentified person, writes back, “UM.” Yaniv then sends a photo of herself and the man she is talking about.

Yaniv claims the derogatory remark was made in jest and got leaked.

“This was a private group chat between friends,” she told the Daily Dot via email. “Someone got accidentally invited that shouldn’t have. The comment was a joke as other members of the group were daring to do it. It was a bad joke and move.”

While people took to social media to express their outrage, many also tried to caution people not to respond to her racism with transphobia.

“We need to be firm and clear about standing against racism. But we also need to cut the cycle of hate. Please be humane in your responses to @trustednerd. It’s possible to call out with denigrating,” Singh added.

For some, Yaniv’s racist remarks just continue her long saga of problematic behavior. White–the YouTuber who Yaniv doxed–told the Daily Dot that she was “absolutely not” surprised to hear about the racist remark and pointed to the numerous problematic statements the Yaniv made during their interview.

Indeed, Yaniv does make racist and xenophobic comments throughout the video.

“We have people that migrate here who think they can do whatever the fuck they want and refuse services to anyone for any reason that they want,” she says in the video.

Yaniv tells a story about being hung up on by an assumed immigrant customer service representative named “Babu” from her bank because the agent did not believe she was a woman. She even specifically calls out East Indian immigrants for their alleged discriminatory behavior toward trans people.

“Immigrants have a very distasteful taste on the trans community,” she says in the video.

When asked about the comments made during the video, Yaniv doubled down on her xenophobic opinions.

“The comments are true,” she told the Daily Dot. “I do not retract my comments. There are immigrants that come here and adapt their overseas cultures here and make us change our ways to suit them, while theirs are rude and often discriminatory.”

For many, Yaniv’s latest flub adds to a long list of unforgivable actions that they believe are having an impact on young women and the trans community.

Jessica Rumple (@HyperJesserz), a young woman who is currently trying to file a report against Yaniv for engaging in inappropriate and sexual conversations with her when she was a child, thinks Yaniv is a “hypocrite” for harboring such negative, racist sentiments.

“JY claims to fight for human rights when (Yaniv) is bringing other humans down that are also different from others,” Rumple told the Daily Dot via DM.
Rumpel provided the Post Millennial with screenshots of various inappropriate messages, including one where Yaniv asked to see pictures of Rumpel’s used tampons and referred to the teen as a “titty queen.” She also provided the publication with recordings of Yaniv using sexually explicit language in Elmo’s voice.
Rumpel is in the midst of formally filing a report but says it is difficult to do without a car. She also claims authorities are doing nothing. “For some reason, the police don’t decide to investigate no matter how many times I try to report it,” she said.
Yaniv denies Rumpel’s allegations and maintains that she has done nothing wrong. As of right now, it is unclear whether or not there will be an investigation.

As for members of the trans community, the damage has already been done. Many have begun distancing themselves from Yaniv altogether.

To those who say this individual is an embarrassment to the transgender community, let me rectify something:

This invididual DOES NOT belong to our community.