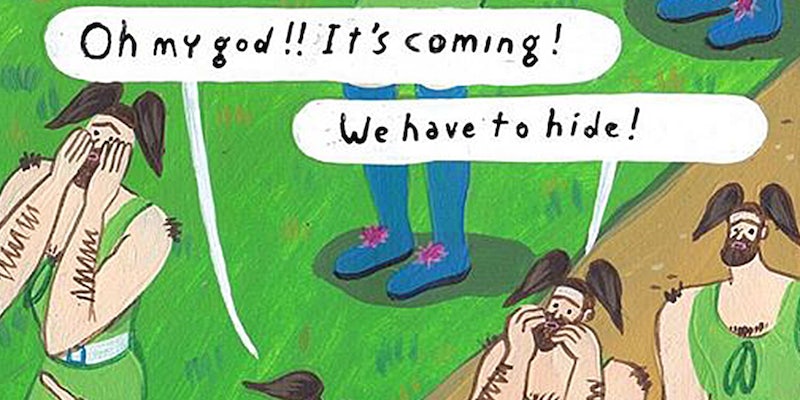 Some argued the comic's message could have a different meaning.

Adult Swim, Cartoon Network’s network for adults, is under fire after sharing a comic to Twitter on Sunday. Commenters accused Belgium-based artist Brecht Vandenbroucke’s comic of having anti-trans and anti-journalist messaging.

The four-part comic strip shows five identical people—each with beards, pigtails, a green dress, and a muscular build—looking up at the sky with dread.

“Oh my god!! It’s coming!” says one of the characters in the first strip. Another character says, “We have to hide!”

The five are then seen running to hide inside a cave. The next strip shows the big ominous presence they were running from—“THE TRUTH” written in 3D, hanging above the village, and casting its shadow on green patches of land.

The next image shows the five people inside the cave seemingly calm and happy. One of them is drawing a unicorn on a notepad, one is holding a mic and a piece of paper, another is writing “Lies Lies Lies” with spray paint on the walls of the cave. One of them is saying, “Oof! At least in here we can safely work on our journalism !!!”

The people running away from “the truth,” which they perceive to be an ominous presence of sorts, are happy inside a bubble. The activities they’re engaged in—arts and music—are seen as congruent with writing “lies.” The unicorn illustration further suggests the people are removed from reality.

Some people on Twitter said that by showing genderbending characters in a cave avoiding “the truth,” the comic pushed “blatant transphobia.”

CW: Extreme Transphobia Seriously This One Is Bad

uhhhh hey adult swim the fuck is this?? https://t.co/jKSktTLWrA

This is what @adultswim decided to feature. #transphobia https://t.co/ihkxjT3iX7

Others resisted the criticism, however, and argued that the comic’s message could be perceived differently based on the context.

How's that transphobic, looking at his other pictures it seems like he just draws like that. Which is maybe why the cartoon talked about journalism pic.twitter.com/k4w3MSGoUX

Is this you projecting your own homophobia or transphobia? Because all I see is people applying their own negative connotations to the bearded men in dresses, which is why this is good art.

In an email to the Daily Dot, Vandenbroucke said he is “not very good with words” and sent more examples of his work as an explanation. “I hope that explains the characters that are in my head better,” Vandenbroucke said.

One comic Vandenbroucke sent the Daily Dot, titled “Genderblenderbland,” shows two physically masculine characters wearing skirts and holding hands. The genderbending couple is pushed into a hole and mixed up in a blender. The resulting mixture is pushed through processing machines labeled male and female, sliced into a cookie-cutter straight couple, and finally spit onto a beach with identical straight couples.

The comic features Vandenbroucke’s Shady B*tch titular character, who dates other masculine characters and is almost always seen with a beard, hairbow, and what looks like a kilt or skirt. The Hundreds style blog described the character a “man-baby,” but it’s unclear whether Vandenbroucke intends the character to be a cis man, transgender, or nonbinary.

“[Shady B*tch] is about a big bearded character that yearns for acknowledgement, adoration and love but has totally no idea how to get all of these things and acts out like a big child,” Vandenbroucke told The Hundreds last year.

Happy pride, Brussels! I did the cover for this week’s @bruzzbe . I also did some illustrations. Thanks to @timyvesmieke . #brechtvandenbroucke #pride #bruzz #illustration

A post shared by Brecht Vandenbroucke (@brechtvandenbroucke) on May 8, 2018 at 11:44pm PDT

A post shared by Brecht Vandenbroucke (@brechtvandenbroucke) on Jun 12, 2019 at 5:11am PDT

Update 4:16pm CT, Sept. 4: A spokesperson for Adult Swim, James Anderson, sent the Daily Dot screenshots of direct messages from Brecht Vandenbroucke to an unspecified sender. In the messages, Vandenbroucke appears to be addressing the criticism for the comic shared to the Adult Swim account on Wednesday.

“Well first of all, its a joke on the difficult state of journalism today ofcourse, with sloppy twitterjournalism in echochambers and sometimes badly researched articles that can easily be verified by the public and constant corrected articles after their publication [sic],” Vandenbrouke wrote. He said in another message that he is gay himself, and his characters “come from that place.”

“It’s a bit like putting on a drag show and turning the world upside down. (Some of) My Humor comes from darkness and pain I think a lot of people take it too serious,” he said, later adding, “I want to make clear I dont have any bad intentions in my heart towards any individual, wether lgbt community or not… I dont make propaganda, im trying to have fun and express myself as an individual and part of that is bumping into the constraints of public discussions.”