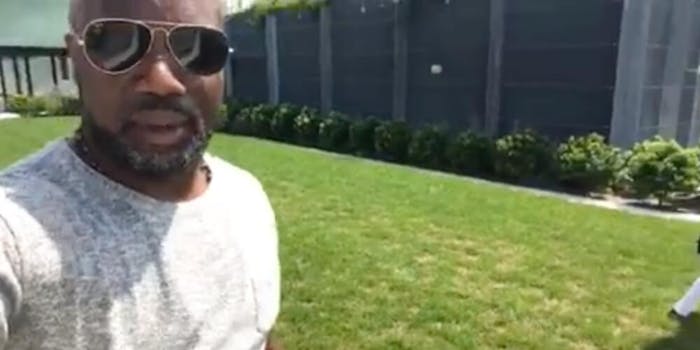 Accusations surfaced against Malik Yoba after he said he is 'trans attracted.'

Actor and writer Malik Yoba has been accused of having sex with trans minors after he claimed in an Instagram post that he is “trans attracted.”

On Aug. 26, Yoba shared the viral video of Maurice Willoughby, known as “Reese,” getting harassed for being in a relationship with a trans woman. The video went viral last month after Willoughby died by suicide.

Yoba’s Instagram post said the video of Willoughby is “another heartbreaking example of the homophobia, transphobia hatred and hypocrisy.”

“Trans love is ok and bullying has nothing to do with masculinity or HETEROSEXUAL behavior,” Yoba wrote. “The fact that he was trans attracted presumably meant that he had no safe space to go to find the support he needed to learn to navigate love of a woman of the trans experience in a world that constantly tells you you’re wrong.”

He continued, “I love ALL women AND count MYSELF among those that find themselves trans attracted and I too have felt the self imposed shame that comes with that truth but it’s time to speak up.”

On Sunday, Mariah Lopez Ebony said in a Facebook post that Yoba, 51, had sex with her when she was a minor. In a post titled “Surviving Malik Yoba: We had sex, when I was just a teen,” Ebony wrote that around 20 years ago, she would see him “cruising around the meatpacking district and Village, large black Jeep, looking for Trans fem sex workers, he preferred black trans girls.”

“That’s not love. Period,” Ebony wrote. “What Malik paid me to do, as a 13 and 16 year old, wasnt [sic] love. His ignoring that I was clearly a child prostitute, wasn’t love. Paying for cheap thrills and secret orgasms; begging for unsafe, unprotected sex from a runaway Trans teen, while enjoying stardom as a successful artist and business man ….isn’t love.”

Surviving Malik Yoba: We had sex, when I was just a teen.For all who applaud and solute Malik Yoba for revealing he is…

New York Penal Law states that sex with a minor under the age of 17 is prohibited even if there is consent from the minor.

Monday evening, Ebony posted that she would be deactivating her Facebook account. The account was still active on Tuesday morning. She did not immediately respond to the Daily Dot’s request for comments.

Can We Talk About it? Malik YobaPosted by Sharron L Cooks on Monday, September 2, 2019

Cooks also referred to Reese’s suicide and said he died due to an “accidental drug overdose” and that his death had nothing to do with being bulled for being in a trans relationship.

“See this issue is bigger than Malik Yoba, OK,” Cooks said in the video. “This issue is about men who are attracted to women who are born gender incongruent.”

She said she felt Yoba’s note was a “PR stunt.”

“Either they wanna beat us, they wanna kill us, or they wanna be us,” Cooks said.“Now that he’s come and confessed his attraction, his previous infractions does not absolve him from the damages that he’s done, from the lives that he has destroyed.”

Yoba’s post comes amid heightened fears of violence against trans women, especially trans women of color. At least 12 Black trans women have been murdered within the first seven months of this year.

Yoba did not immediately respond to the Daily Dot’s request for comments.