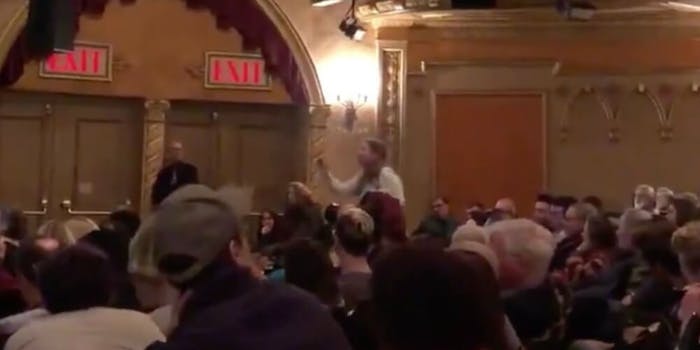 The playwright has since responded.

A white woman interrupted the Q&A portion of Slave Play to allege that its Black, gay playwright is “racist against white people.”

Washington Post journalist Adam Kushner shared a three-part video of the incident on Twitter Friday. Kushner called it “a perfect, inadvertent encapsulation of one of the play’s core ideas” as the woman “kept saying how oppressed she was.” The Broadway play explores race, sex, and power dynamics by following three interracial relationships that take on slave-master role-play.

She kept saying how oppressed she was and how she’d fought her whole life for … it wasn’t clear what, but presumably something worthy. A perfect, inadvertent encapsulation of one of the play’s core ideas.

The footage starts off with the woman already screaming in what appears to be a packed hall.

“I don’t wanna hear that white people are the fucking plague all the time,” she says.

One audience member can be heard saying that the woman was “talking over Black people right now.” The sentiment was met with cheers and applause from the crowd.

The woman then went on an unrelated rant about the struggles of being a single mother.

“Most of us fucking having children taken away and being told that as a single woman I’m not good enough to fucking raise them,” she says. “How the fuck am I not a fucking marginalized member of this goddamn society?”

The playwright, Jeremy O. Harris,‎ responded to the woman by calmly urging her to “read it or see it again.”

“I’ve never once said that you as a white woman are not a marginalized person,” he says. “But if you heard that in my play, I don’t know what to tell you.”

The woman continues to shout about how she is fed up with hearing “a whole bunch of stuff about how white people don’t get how racist they are” because of something that happened “300 years ago.” She was presumably referencing slavery.

Harris responds by telling the woman that the play is about eight people only, not every white person.

“If you don’t see yourself up here, then that’s great, you aren’t one of them,” Harris‎ says. “These are eight specific people that are in a play for a metaphor for our country … And the metaphors don’t represent every single person, it just represents these eight people.”

She then asks him what the solution to racism is, and he tells her he doesn’t know.

The woman and Harris go back and forth, while one audience member points out that the woman was “the only one yelling.”

“I think you’ve given us another really amazing play,” Harris says as the crowd cheers.

The woman then walks out of the theater.

A member of the audience, who was sitting a few rows behind the woman, told BuzzFeed News that the woman raised her hand during the Q&A portion, and Harris picked on someone else to ask him a question. That’s when she went off.

Harris has since responded to the incident by telling the Washington Post the woman made herself part of the play’s story.

“The play shows the unconscious ways that white people take up space, that they don’t leave open for black people,” he told the Post on Saturday. “This play doesn’t necessarily have to be about her … but she did just create her own character.”

People on Twitter suspected the woman of feeling white guilt when watching the play and dealt with her emotions in a very abrupt, ironic manner.

“Until people like this woman realize that the point of telling stories of black oppression is NOT making them feel better about racism and giving them a cookie for having a human emotion, they’re gonna be mad,” columnist Leslie Streeter tweeted.

Until people like this woman realize that the point of telling stories of black oppression is NOT making them feel better about racism and giving them a cookie for having a human emotion, they’re gonna be mad.

I saw the play a second time this week and felt weird about taking up a space that perhaps isn’t mine to take. This woman…lol help her.

She was affected by what she saw and heard. She felt insulted and is one who's tired of hearing about Blacks getting credit for "complaining".

Others pointed out that the woman’s white privilege allowed her to scream at Harris in the first place.

“If she weren’t white they would have removed her with a quickness,” Twitter user @KBWoods24 wrote.

Exactly. If she weren’t white they would have removed her with a quickness.