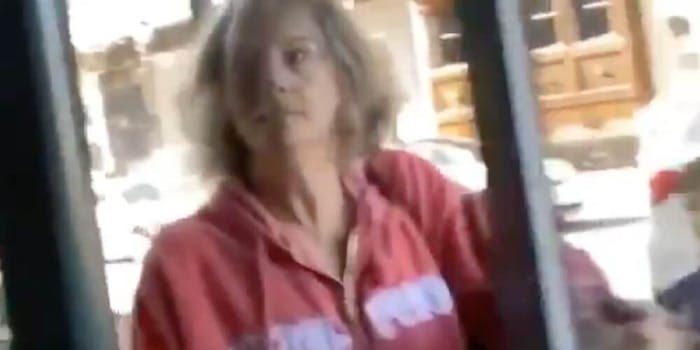 White woman keeps Black woman back from exiting her own building, calls her ‘robber’

'You gonna go rob somebody?'

A viral video shows a white woman apparently blocking the entrance of a building and not allowing a Black woman to “go anywhere” because the white woman believed she would “rob somebody.”

Instagram user Taheerah Rashad on Friday posted a video of the incident, which has since garnered thousands of views. The video was shared online by activists such as Simraj Jeet Singh and user @_SJPeace_, who identified the location as Maryland’s Montgomery County.

I’m gonna post this for today but to show you all that certain white people think they’re superior than everyone else and it’s not fair. My mom has worked hard just like 90% of the white people who live here. Get a life. #explorepage “what are you gonna rob somebody” @theshaderoom

The minute-long video shows Rashad recording from an angle as she is being held by an old white woman who appears to be blocking the main door of a building. In her post and in Twitter exchanges with activists, Rashad said the white woman was stopping her from leaving her own building. Rashad did not immediately respond to the Daily Dot’s request for comment.

“You got three seconds to get out of the way, I’m gonna beat the shit out of you,” she tells the woman whose face isn’t clearly visible in the video.

A young kid is heard from out of the frame, pleading with the old woman. “Nana please,” he says.

“Tell her to move,” Rashad is heard saying to the kid.

“Nana please,” the child says repeatedly from outside the door.

“Here’s a old ass woman guys,” Rashad says as the kid in the background is heard continuing to repeating, “Nana, please! Please!”

“Tell your nana to get her ass out of the way,” says Rashad.

At this point, the child comes up to the door and opens it, and the woman scurries out.

“Fuck out of the way dumb bitch,” Rashad says, “Fuck you bitch.”

The woman opens the door briefly and says to Rashad, “You gonna go rob somebody?” before walking away with her grandson.

“This bitch is crazy as fuck,” Rashad says, zooming in on the woman outside. “She just stood in the middle and held me and then she said I’m gonna rob somebody.”

According to a screenshot of a conversation that @_SJPeace tweeted, Rashad says the white woman did not believe she lived in the building because “majority people who live there are white.”

Account of the victim. This racist lady told her that she didn't live in the apartment building because most of the people who live there are white!

SHE NEEDS TO BE EVICTED AND ARRESTED! pic.twitter.com/vLYTABaT6p

People on Twitter shared their frustration about the repeated incidents of videos showing white people harassing Black people. Some pointed out that the white woman was not actually in fear of her safety because she stuck there and stopped Rashad from stepping out, while her own grandkid was in the situation — not a typical response for someone who scared because they’re facing a “robber.”

Allegedly thought the woman was dangerous enough that she needed to be physically blocked from entering her house, wasn’t too scared to engage with her in front of her grandkids.

And with a child in tow. Not a fear response. It's about control.

The videos went viral after being shared on Twitter on Sunday, and another young Black woman tweeted that the white woman lives “directly next to” her in the same building and is generally “nice” to her.

Rashad said she would be headed to the leasing office on Monday and address the situation.