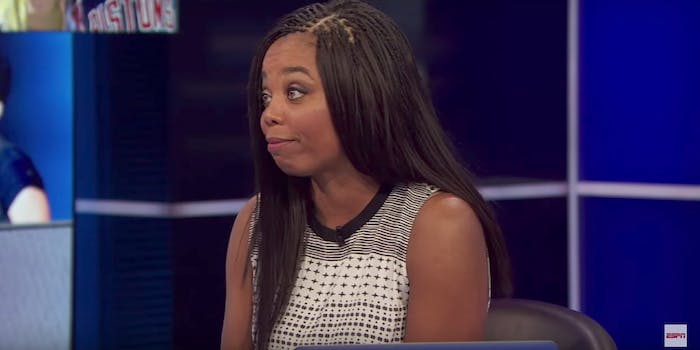 This was her second social media 'violation,' ESPN said.

In a tweet Sunday, Hill said boycotting advertisers is a good way to make “change happen,” after Dallas Cowboys owner Jerry Jones said he would bench kneeling players for “disrespecting the flag.”

“This play always work,” Hill tweeted. “Change happens when advertisers are impacted. If you feel strongly about JJ’s statement, boycott his advertisers.” She then added, “Don’t place the burden squarely on the players.”

This play always work. Change happens when advertisers are impacted. If you feel strongly about JJ's statement, boycott his advertisers. https://t.co/LFXJ9YQe74

If you strongly reject what Jerry Jones said, the key is his advertisers. Don't place the burden squarely on the players. https://t.co/Gc48kchkuv

In a tweet Monday, Hill clarified she’s not “advocating a NFL boycott.”

Just so we're clear: I'm not advocating a NFL boycott. But an unfair burden has been put on players in Dallas & Miami w/ anthem directives.

“But an unfair burden has been put on players in Dallas & Miami w/ anthem directives,” she wrote.

In an official statement, ESPN suggested the boycott tweets led to her suspension.

“She previously acknowledged letting her colleagues and company down with an impulsive tweet,” the statement said. “In the aftermath, all employees were reminded of how individual tweets may reflect negatively on ESPN and that such actions would have consequences. Hence this decision.”

Hill came under fire last month when she tweeted that President Donald Trump is a “white supremacist.” In response, Trump tweeted demands that the network “apologize for the untruth,” while Press Secretary Sarah Huckabee Sanders suggested Hill be fired.

Hill apologized for the public forum of the tweet but not for her comment about Trump. Others noted that the White House’s calling for her termination was a clear abuse of power.

So, to address the elephant in the room … #Facts pic.twitter.com/RTrIDD87ut

It is unclear whether Hill is suspended with or without pay.