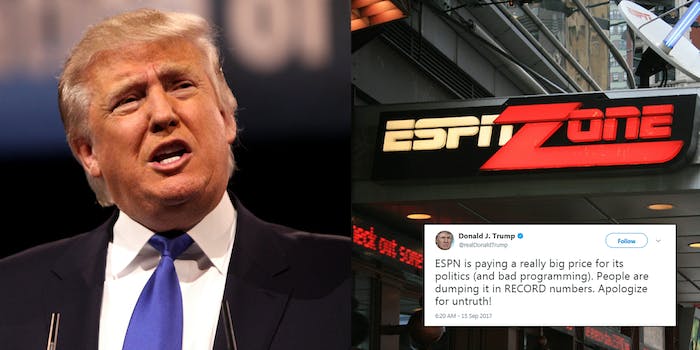 Cord cutting is to blame for ESPN's falling subscriber base.

President Donald Trump railed against ESPN on Friday morning, presumably in response to an anchor who recently called him a “white supremacist.”

However, Trump falsely indicated the sports network was losing money as a result of “its politics.”

ESPN’s SportsCenter anchor Jemele Hill recently tweeted that Trump was a “white supremacist who has largely surrounded himself w/ other white supremacists.” She ultimately apologized for the tweet.

“ESPN is paying a really big price for its politics (and bad programming). People are dumping it in RECORD numbers. Apologize for untruth!” Trump wrote.

ESPN is paying a really big price for its politics (and bad programming). People are dumping it in RECORD numbers. Apologize for untruth!

Trump’s trashing of ESPN on Twitter followed White House Press Secretary Sarah Huckabee Sanders suggesting that the anchor be fired for the tweet during a White House press briefing on Wednesday afternoon.

“That is one of the more outrageous comments that anybody could make,” Sanders said. “And certainly is something that is a fireable offense by ESPN.”

The comments sparked outrage from journalists who saw the White House calling for a member of the media to lose her job as a direct attack on her free speech rights.

Trump is correct that the sport-giant is losing subscribers. The network lost 3.8 percent of its subscribers in May, a notch higher than the 2.9 percent drop across the board for cable channel subscribers during the month, according to Nielsen estimates.

ESPN was once a cash cow for Disney, which owns the network. But it’s not politics and certainly not Hill’s tweet that has caused a decline in subscribers—it’s cord cutting.

With the countless number of streaming options available to people, hordes of former paying cable customers are switching to online TV options. With sports in particular, fans no longer have to tune in to ESPN to watch the biggest highlights of any game because they can watch them on social media minutes after they happen.

The Economist points out that cord cutting is a serious issue for ESPN because if fewer people are subscribing to the station, it will become harder for the network to get rights to large sporting events.