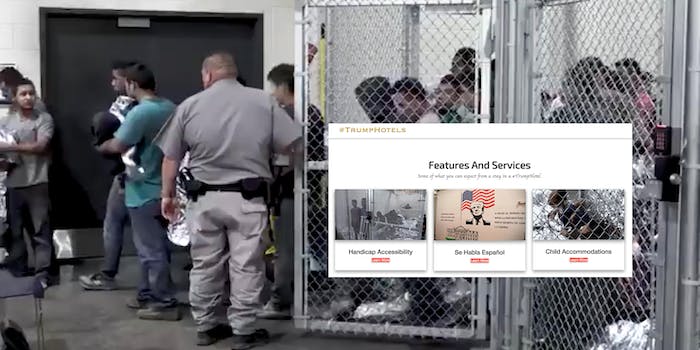 He has some choice words to describe the president.

If you’d guessed the person behind Trumphotels.org, which features images of immigration detention centers, was a left-wing activist, you’d be dead wrong. Gizmodo found the guy behind the website, and it turns out he’s a conservative—who happens to hate President Donald Trump just as much as liberals.

Loren Collins, 40, is a lawyer who once ran for Republican office in Georgia. He finds Trump to be “ignorant, intemperate, foolish, gullible, intellectually incurious, pathologically dishonest conspiracy theorist who is utterly unqualified for the job of running of a country,” Gizmodo reports.

So when he noticed a friend using #TrumpHotels, Collins immediately recognized an opportunity to satirize what he called the “border fiasco,” aka Trump’s immigration policy that separated and detained immigrant families.

“I thought that it’d make good satire to create a mock hotel site for the hashtag, and I was surprised to discover that they’d never bought TrumpHotels.org, even though the .com is their main site,” Collins said. “So I bought it for $8 last Wednesday, paid another $8 to protect my privacy a little bit, and threw together a WordPress page that I uploaded last Thursday afternoon.”

He’s counting on the Trump administration to not try and squelch his website, since doing so would draw more attention to it.

“I’d like to think they’d avoid drawing more attention to my work,” Collins said. “And it’s a very, very bad look for a sitting president to try to silence political criticism through threats of litigation against private citizens.”