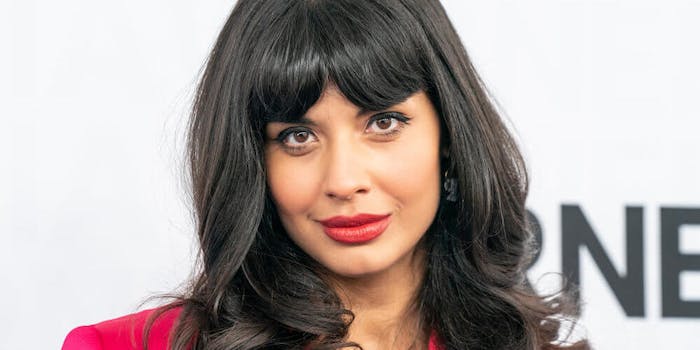 The two clash over the modeling industry.

Actress Jameela Jamil and model Sara Sampaio got in a Twitter tiff Wednesday night after Jamil called out the modeling industry for profiting off “long-starved terrified teenagers.”

Jamil retweeted a video from the “Colors of Africa” Vienna fashion show which featured women diverse in skin color and body type on the runway, and said that “this looks like the most fun, and not a long-starved terrified teenager in sight.”

Sampaio, best known for her work with Victoria’s Secret, took offense to this statement and accused Jamil of “bringing other people down” and “hypocrisy.”

How about celebrating someone without bringing other people down? Calling runway models “long-starved terrified teenager” is extremely offensive. From someone that is always preaching for body positivity this just screams hypocrisy. https://t.co/JOBtY0yrui

Jamil, whose Twitter bio reads “I respond publicly, so don’t start fights with me that you can’t finish,” couldn’t let this one go. She responded and said that a “vast majority” of young models starve themselves and even use “drugs and cocaine to control their weight, to meet the very small sample sizes.” Jamil then told Sampaio if she doesn’t see these issues, she must live in a “bubble.”

Sampaio still did not let Jamil make these claims without pushback, and said that “eating disorders, drugs and cocaine use aren’t [an] exclusive problem of models.” Sampaio also said that she knows more about the modeling industry than Jamil.

Have eating disorders and drug problems, when that’s not the case. And about modeling I can for sure talk with more certainty than you. Sure that happens but it’s for sure not a vast majority. The point of my tweet though, wasn’t that one! And you know!

Jamil and Sampaio continued back and forth arguing about credentials and how much responsibility the modeling industry bears for eating disorders and abuse of weight loss drugs. Neither reconciled their differences. Jamil later tweeted and called Sampaio “wrong,” while Sampaio said that Jamil is “not willing to listen nor trying to understand other people’s opinions.”

I said what I had to say. She’s not willing to listen nor trying to understand other people’s opinions… I stand by what I said! You never need to bash other people to celebrate others! No matter what. https://t.co/RQshbRs0bi

Jamil was not wrong to say that teenage girls are often used in major fashion shows. Using teenage models has become an increasingly popular practice as younger girls are much more likely to fit sample sizes. But many people are against this practice and are working to raise the minimum age requirement for models in major shows.

And while outsiders can debate about exactly how many models have eating disorders, statistics do show that 62.7% of teenage girls use “unhealthy weight control behaviors” and 20% of young women have used diet pills by age 20, according to Addiction Center.

Jamil is an outspoken critic of diet culture and an advocate for body neutrality—and is far from done fighting body-shamers online.