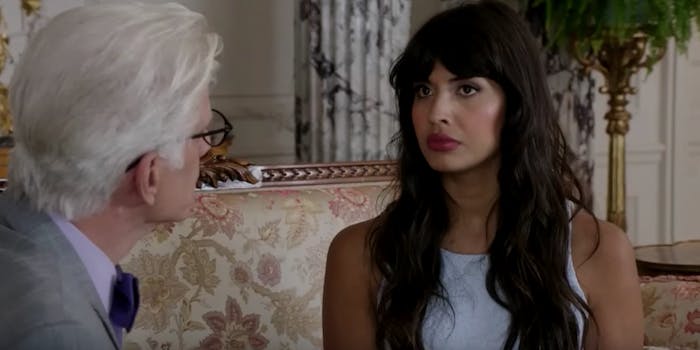 Protect Jameela at all costs.

The Good Place‘s Jameela Jamil took Hollywood to task this weekend after news broke that actor Emile Hirsch had been cast in an upcoming Quentin Tarantino project.

News broke on Friday that Hirsch had been cast in a new Tarantino film about the Manson Family murders. Back in 2015, Hirsch was sentenced to 15 days in jail after pleading guilty to assault for choking a female studio executive at a party during the Sundance Film Festival. That executive just so happens to be Jamil’s best friend, so when she caught wind of the casting news Friday, she took to Twitter to remind the industry just who was being welcomed back into its A-list projects.

Among Jamil’s list of concerns about the casting is the fact that Hirsch has still not shown remorse for what he did in 2015.

“Left her with three years of PTSD and never paid for her treatment, and still hasn’t apologized to her,” she wrote. “Not today Satan, not today.”

“Slow clap to everyone involved in this movie,” she continued. “So many other actors who haven’t attacked women to choose from.”

As news outlets picked up Jamil’s tweets and the story got bigger, she expanded upon her thoughts throughout the weekend.

“Today has been a slightly intense day,” she tweeted early Saturday. “I am extremely moved by the support for my friend. I hope Emile does right by her.”

Jamil went on to outline what she would consider an appropriate course of action at this point. “I hope Emile does right by her. I hope if he does not, the cast moves away from him. By celebrating men who hurt women, we tell men and women, it is ok to hurt women. Time’s up on this shit.”

On Instagram, Bono’s daughter Eve Hewson came to Hirsch’s defense, calling the attack a “mistake.” Jamil was quick to fire back.

“Why is abusing women always classified as a ‘mistake’?” she wrote. “If people hadn’t pulled him off her, he could have killed her. We didn’t call what Roseanne said a mistake. We took her off the air. When Nate Parker was cleared of rape and only accused of intimidation, they erased his career and binned his movie. May someone never make the same ‘mistake’ around your windpipe, or that of your loved ones. And if they do, may they be punished appropriately and may they help you in any way they can to heal and recover.”

When one magazine joked that we need to “protect Jameela Jamil at all costs,” her boyfriend the musician James Blake joked “I am trying my best.”

I am trying my best https://t.co/nn6dnKTAR5

Jamil is no stranger to taking a stand on social media. This past spring, she launched a meme aimed at helping women celebrate their bodies instead of criticizing them.