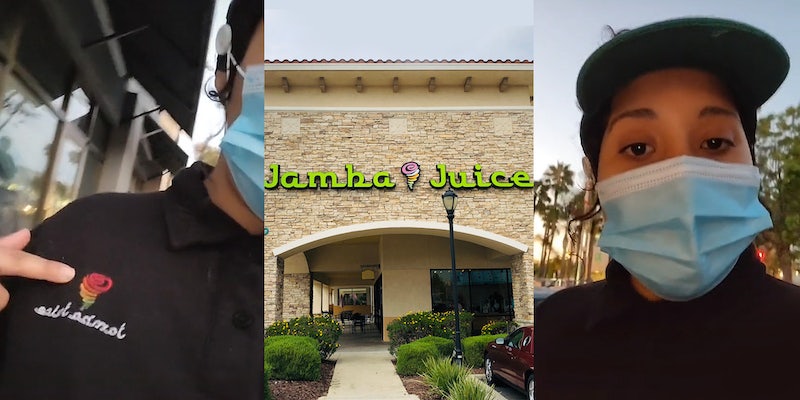 ‘They are lying. People do want to work’: Jamba Juice worker says rising prices are causing understaffing and fewer hours for employees

'You can’t get that many hours because people are not going out, spending money, because everything is really expensive!'

While many claim that “no one wants to work anymore,” a recent video from TikToker Laura (@laurayuc69) states that is far from the truth. Instead, those who do want to work are simply not given enough hours, leading to reduced store hours and understaffing.

In a TikTok with 41,000 views, she uses her job at Jamba Juice as an example to argue that increased prices are leading to fewer hours worked by employees.

The creator stitches a video from user Ash (@cutepieceofash), who shares her frustrations about sending in countless job applications but not being able to be hired. “They’re posting that they’re hiring, but not actually trying to hire anyone,” she says.

@laurayuc69 #stitch with @cutepieceofash people want to work, but everything is too expensive->no one wants to spend->people don't get hired->and the cycle continues #ReTokforNature #PostitAffirmations #fyp #jamba #work #jobs ♬ Love You So – The King Khan & BBQ Show

Laura responds, reiterating Ash’s point that the number of applicants is not the problem.

“The thing is that people are definitely applying to jobs. I am the one that deals with the applications and the hiring and everything. I’m the first that deals with all of that in my store, and I can tell you I get people wanting to work here all the time,” she starts.

With the inflation rate climbing 8.6% this year, the fastest rate of growth in 40 years, the Jamba Juice worker cites these price increases as the reason many jobs are understaffed and workers’ hours are being cut—leading to fewer hires overall.

“People want to work, if not here, then at, you know, the Starbucks and every other place that’s around here,” Laura continues. “But the thing is, once you get hired, you can’t get that many hours because people are not going out, spending money, because everything is really expensive!”

“So yeah, they are lying. People do want to work,” she concludes.

In the caption, she clarifies her statement with a text diagram, saying that “people want to work, but everything is too expensive->no one wants to spend->people don’t get hired->and the cycle continues.”

She also added in comments that she herself is hurt by this issue.

“…the reason why I haven’t hired anyone is bc my team is suffering to get hours,” she explained.
“I am working 2 days a week rn…”

Other users in the comments chimed in to say they were having a similar experience in the workforce.

“I recently got hired at a retail store a few weeks ago and I’ve maybe gotten 4 or 5 shifts, only 2 being a full 8 hours,” one user claimed.

“I also work at this business, and let me tell you, I have people coming in everyday asking for work. But my ‘hiring manager’ never hires,” another added.

“That’s been my major issues, the hours.. I even upgraded my driver’s license hoping to find work driving. nothing yet,” a further user explained.