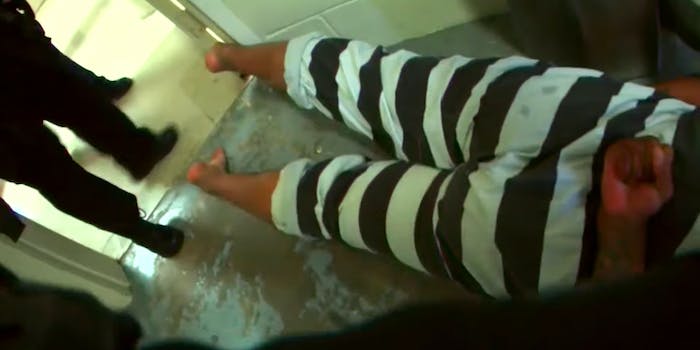 Two deputies repeatedly use the taser on Jamal Sutherland as he cries out in pain.

The Charleston County Sheriff’s Office on Thursday released video footage showing the lead-up to the death of Jamal Sutherland.

Sutherland, 31, was arrested on Jan. 4, according to NBC News, after a fight broke out at a psychiatric facility where he was receiving treatment. He was then brought from the facility to jail.

But an altercation reportedly broke out the next morning as deputies attempted to take Sutherland to his bond hearing.

In the video, two sheriff’s deputies are outside Sutherland’s cell as one deploys a taser, using it repeatedly, as Sutherland cries out in pain. Police records reportedly claim Sutherland was tasered at least six times.

Soon after deputies handcuffed a limp Sutherland, he began thrashing his legs before falling limp and going motionless. He was pronounced dead after attempts by medical staff to resuscitate him, CNN reports.

While the two deputies involved in Sutherland’s death were initially suspended for 30 days, they are now on desk duty, CNN reports. In a statement posted to Twitter, Charleston County Sheriff Kristin Graziano called Sutherland’s death a “horrible tragedy.”

“Our officers removed Mr. Sutherland from his cell that morning in order to ensure that he received a timely bond hearing, as required by law,” Graziano said. “Their efforts were complicated by the increasing effects that Mr. Sutherland was suffering as a result of mental illness.”

“Since this tragedy occurred, we have assessed our resources and are evaluating options for global improvement, including a focus on mental health awareness,” Graziano added.