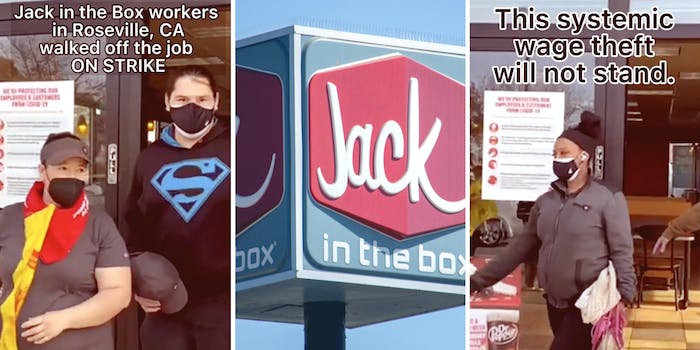 ‘These companies need to step up’: Jack in the Box workers walk out in a viral TikTok

The employees were protesting working conditions, including a lack of breaks.

The pandemic has bolstered the need for fair compensation and better working conditions. Most places are understaffed and employees are overworked, leading to many resigning. Case in point, a viral TikTok captured the moment a group of Jack in the Box employees walked off the job and went on strike.

In the video, posted from what appears to be the Fight for $15 TikTok account, viewers can see the employees of a location in Roseville, California on strike. The text on the video says that under California law, workers are allowed a 10-minute break if they work more than three and a half hours. One of the workers at this location, the video says, has worked there for 17 years and allegedly never got these breaks nor has she been paid overtime.

“This systemic wage theft will not stand,” the text that ends the video says.

@fightfor15 It’s clear when we are being exploited, and we won’t take it. #strike #jackinthebox #wagetheft #fightfor15 #ca #fastfood #fastfoodworker #exploitation ♬ original sound – Fight for $15 and a Union

The video has since received over 179,000 views and over 1,200 comments with many people showing solidarity for the workers trying to fight exploitation in the workplace.

“That’s how Billionaires get their $ stealing wages from their workers!” one comment said.

“Yessss!! They need loyal management that know the truth. Instead of exploiting their workers!” another person wrote in the comment section.

“The power of people is stronger than the people in power,” a viewer wrote.

“Yes these companies need to step up. These kids are smarter than us and will change the world to fair,” one user said.

Recently, social media has seen many people posting their conversations with bosses and quitting their jobs. It’s been referred to as the “Great Resignation” and according to the  U.S. Bureau of Labor Statistics, 4 million Americans quit their jobs in July 2021 alone.

The Daily Dot reached out to Jack in the Box via their press email but did not immediately receive a response.