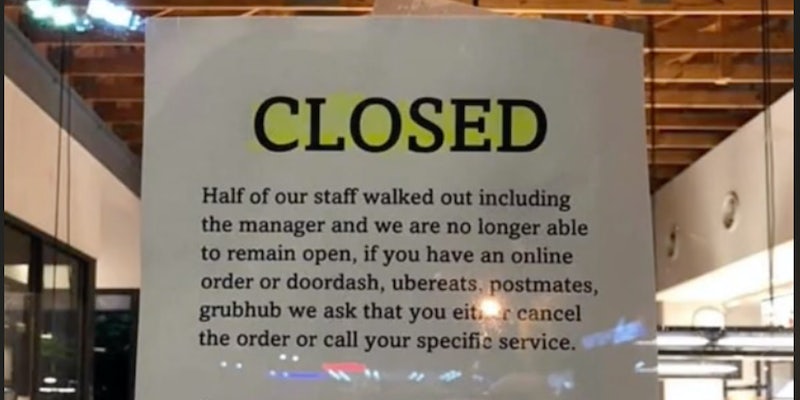 ‘Pay better and treat employees better’: Sign saying Chipotle forced to close after half of its staff ‘walked out’ goes viral (updated)

A Chipotle location in Bardstown Road, Kentucky, was reportedly forced to temporarily close its doors after half of its staff walked out on the job.

A video featuring the simple sign left by employees went viral on TikTok in the hours following the mass resignation. It was also posted to Facebook by local Kentucky reporter Doug Proffitt, who shared it alongside a statement from Chipotle.

“Closed,” the posted note reads. “Half of our staff walked out including the manager and we are no longer able to remain open.” It goes on to instruct delivery drivers, including those working for Uber Eats, DoorDash, and GrubHub, to either “cancel your order or call your specific service.”

The location’s general manager, Raven Whallen, provided details about the staffing issues when reached by the Louisville Eccentric Observer. A series of unexpected staff resignations forced the Chipotle location to temporarily close its doors on Monday, but that didn’t prevent it from reopening Tuesday morning. The restaurant lost three employees on Monday, according to Whallen. One reportedly already put in her two-weeks notice but decided to leave her position early. Another was reportedly too frightened to return to work after discovering that her car’s catalytic converter was stolen and her tires slit. A manager also left their position, leaving the store acutely understaffed.

The Chipotle, like many restaurants and fast-food locations across the nation, has been struggling to maintain staff. The ongoing pandemic, paired with difficult customers, uncaring corporations, and low pay, make for a difficult sell, even among the industry’s typically young workers. As noted by Whallen, “A lot of people don’t want to work nights, and if they do, they’re underage. So, it’s kind of hard because they all have to be off at a certain time. We have to follow the labor laws.”

Another person claiming to be a former Chipotle manager, Sidney Plogsted, noted that customers pushed staff “to the brink” during the pandemic.

“We worked throughout this entire pandemic (and did a damn good job, at that), and the thing that pushed us to our breaking points were the customers treating us poorly for doing the best we can,” she wrote. “My team and I were cussed at, threatened, had food thrown at us, and called degrading and dehumanizing things over something as simple as a messed up order.”

She went on to say that corporate expected those employees who did show up to work “50-70 hours a week” to cover for missing staff members. All this while the corporation’s leaders sat “in their offices not helping us just so we can work ourselves to death as we made them more money,” she said.

In a final note, she pointed out that “most people who work fast food are teenagers and in their twenties” and reminded people to “be kind to fast food workers !!! They are people, with families, emotions, and lives outside of where they work, not robots.”

Chipotle’s Chief Corporate Affairs Officer Laurie Schalow responded to the sudden store closure in a statement to the Daily Dot: “Our restaurant on Bardstown Road is now open, but did experience a temporary closure Monday afternoon due to staffing needs. Chipotle’s engaged and hard-working employees are what makes us great, and we encourage our employees to contact us immediately, including through an anonymous 800 number, with any concerns so we can investigate and respond quickly to make things right.”

On TikTok, the note was posted by @roc_united, a nonprofit organization which aims to help “working people” to be “provided with livable wages and workplaces that are fair, safe, inclusive and accessible, and where they receive living wages, pathways for advancement, and benefits for themselves and their families.”

People flocked to the comments section of the straightforward video to share their thoughts. One commenter framed the situation well, writing “Employers in 2020: You’re essential. Employees in 2021: Prove it.”

Other commenters felt little sympathy for Chipotle, calling on the corporation to “pay better” and on customers to treat “workers like human beings.”

There were rare dissenters among commenters, parroting familiar lines about employees expecting too much pay for a job deemed by many to be simple. “Doesn’t sound like a pay better situation, sounds like a hire better situation to me,” one commenter wrote.

The dissenters were few and far between, however. The vast majority of commenters threw their weight behind the employees, and congratulated them for “waking up” and forcing change. They urged minimum wage workers to “never go back to the old normal.”

The sudden mass exodus came only a day after Chipotle ran a Halloween special, in which its burrito bowls were discounted to $5. Footage of utterly packed restaurants showed the strain employees are under during promotions like these, and illustrated for many people the conditions they are expected to work in.

The Chipotle closure follows a trend that has been picking up momentum in the United States. In what is being dubbed the “Great Resignation,” employees are quitting in droves, demanding better pay and hours and safer working conditions.

This story has been updated to include a statement by Chipotle.