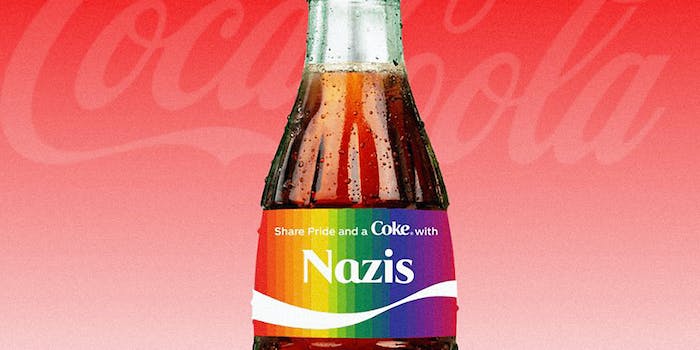 IRL newsletter: You can put ‘Nazis rule’ on a Coke bottle

Plus: Joining a kickball league for self-care.

Twitter users were troubled on Monday to learn that, at least briefly, the Coca-Cola Co.’s website didn’t allow people to put “Palestine” or “Black Lives Matter” on its customizable Coke bottles—but appeared to let users label their bottles “blue lives matter” and “Nazis.”

In a viral tweet on Monday, user Rami Ismail (@tha_rami) directed followers to go to the “Share a Coke” personalized Coke bottle webpage and “enter ‘Palestine.’”

User Laura Kate Dale (@LaurakBuzz) said that the censor, however, allowed a preview of the name “Nazis” to appear on the bottle. Dale shared with the Daily Dot a screenshot of the bottle preview that showed “Nazis.”

Twitter users continued to test explicit or LBGTQ phrases onto a bottle. One person tested “dead babies” and “forced penetration” and found that the customizer tool accepted both. A screenshot showed that “ACAB,” an acronym for “all cops are bastards,” also appeared to pass the censor.

The Daily Dot verified on Tuesday afternoon that the Coke bottle personalization page selectively blocked phrases or words. For example, “blue lives matter” made it onto a bottle; “Black lives matter” did not. The word “slavery” would not push through, but “forced labor” did.

The Daily Dot found that the words “Israel,” “ACAB,” and “Nazis” were also blocked on Tuesday. “Nazis rule,” however, passed the censors.

“We’re continuously refining and improving our Share A Coke personalization tool to ensure it is used only for its intended purpose—for Coca-Cola fans to celebrate with one another and make connections,” a representative for the Coca-Cola Co. told the Daily Dot. “We add terms and phrases if we feel they are consistent with that intent.”

It’s unclear if the bottles receive secondary screening after the order is created.

Does the COVID vaccine make your breasts bigger?

Some women who received the Pfizer or Moderna COVID-19 vaccines have reported side effects that resemble breast cancer symptoms. In addition to experiencing disproportionately severe side effects compared to men, along with abnormal menstrual cycles, doctors have also seen female patients develop swollen lymph nodes after receiving the vaccine. This has some people speculating that the COVID vaccine can make your breasts larger.

The Centers for Disease Control and Prevention documented 11% of patients with swollen lymph nodes after their first shot of the Moderna vaccine. Sixteen percent of patients experienced swollen nodes following their second shot. The swelling typically occurs two to four days after injection and can last between four and 12 weeks.

The American Cancer Society and the Society of Breast Imaging are among several public health agencies that recommend women planning to get a mammogram do so before receiving the vaccine.

Even in patients not experiencing swelling or tenderness, it’s still possible for enlarged lymph nodes to show up on a mammogram—potentially triggering a false positive.

If they must get screened after a vaccine, experts advise waiting between four and 12 weeks. One expert, however, stressed that people shouldn’t intentionally delay mammogram screening appointments or vaccinations without consulting with their doctor.

New adult on the block

I’ve been living in my new home in Salt Lake City for just over week, and I’ve already done something I’ve never done before: I joined a team sport—by choice.

Yep, I signed up for an adult kickball league, one geared toward members of the LGBTQ community and their allies. My motivation was a combination of post-vaccine excitement and anxiety about making friends in a new city as an adult. Was I nervous? Yes. Did I almost skip the first game due to first-day jitters reminiscent of high school? Also yes.

But lured by my supportive partner and the promise of a Donna Summer-heavy playlist on the field, I made it. My team is New Kicks on the Block—probably because we’re all first-timers—and I was pleasantly surprised that my teammates are a diverse range of ages, races, and skill level. We had our butts handed to us in the first game of the season, but it didn’t matter. I tried a new thing, and I liked it.