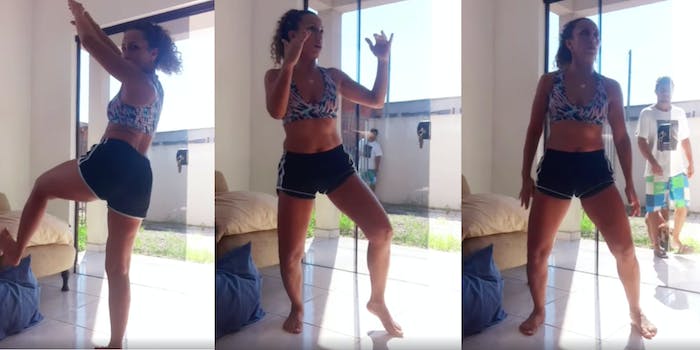 The video shows the intruder creeping up on the nurse, who was recording a dance video for Instagram.

An intruder in Brazil picked the wrong house.

Brazilian nurse Angela Goncalves went viral for sending a home intruder running while recording a dance video at her home in Paranagua.

Goncalves was recording a dance video for Instagram in her living room earlier in the week. In the video, a man is seen lurking outside her home right before he enters the side gate.

She gets pretty frightened as she realizes his presence and laughs uncomfortably. She later said in a Facebook post that she smiled out of “nervousness.”

That’s when he tries reaching out to her, and she reacts by slapping him while screaming at him. “On that, with my docile pitbull instinct, I beat the hell out of him,” she said in her initial post.

The video shows Gonclaves chasing him off the property, managing to land a kick as he runs away.

She posted the video on Facebook and said that her 11-year-old daughter was in the house with her. The video has over 1.4 million views.
The New York Post reported that Gonclaves already filed a police report about the incident.