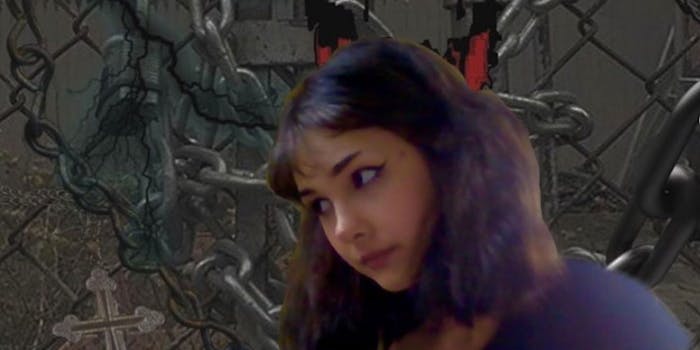 Private accounts are luring followers with the promise of 'the photo.'

Instagram is scrambling to contain the photos of slain teen Bianca Devins as accounts crop up to share photos of her decapitated body.

Devins, a 17 year old known as @escty on Instagram, was found dead on Sunday morning in Utica, New York. The suspect, Brandon Clark, allegedly beheaded her, took photos of her body, and shared them on her Discord channel. He also posted photos before and after the killing on the story of Instagram account @yesjuliet.

While Clark’s account was immediately removed from Instagram, the social media platform is struggling to stop others from spreading the gruesome images. Before posting photos of Devins’ body, he had posted a photo of a street through the windshield with the caption, “Here comes Hell. It’s redemption. right?” which continues to appear in certain accounts. But the photos advertised in the bio of these accounts are referring to that of Devins’ beheaded body.

By Monday, the Daily Dot reviewed at least two accounts that showed photos of Devins’ decapitated body. Instagram confirmed it had removed some of the accounts, but by Thursday morning, there were new accounts mimicking Devins’ name and taunting potential followers with “the photo” in exchange for followers. The issue highlights, yet again, the tech world’s inability to cope with abuse on these platforms as they shuffle between protecting users from harmful content and allowing free speech.

Instagram is using “image hashing” technology that flags photos matching the one Clark posted and removes them, Mashable reported on Wednesday. An Instagram representative previously told the Daily Dot that the company’s technology flags any attempt to upload a specific photo and automatically removes the image.

But people have tweaked the photos to pass through Instagram’s filters, and some accounts are using Devins’ name to gain followers.

One account @daddyxmemezz, had “bianca devins is gone” set as its display name. The account’s profile picture is a cartoon that mimics the photo of Devins’ beheaded body.

Another account, @sensitjvecxntentt, also had the display name “Bianca Devins” on Thursday morning, with the bio reading, “dm me if you have videos/pics.” The Daily Dot was granted access to the private account, which displays mostly unrelated content except for two screenshots of posts from Clark’s account that came before and after Devins was killed. The earliest post on @sensitjvecxntentt account came on Wednesday, indicating that it’s one of the accounts that was started following Devins’ death. The account had almost 4,000 followers at press time.

Even accounts that aren’t sharing the graphic photos of Devins’ body are using her name to draw followers. According to Mashable’s report, photos posted as profile photos or shared in videos get past Instagram’s filter technology. Mashable also accessed one account showing a photo of Devins’ body and claiming to sell t-shirts with the photo.

Other users have created positive accounts and posts in honor of Devins, tagging her account so it’s brimming with well-wishes and prayers for her, many with “Pink for Bianca.” Some posts have asked users to stop following accounts offering photos of her death.

The family’s statement said the funds will be used toward scholarships “for students pursuing a degree in psychology so they can continue Bianca’s dream to help adolescents with mental illness.”