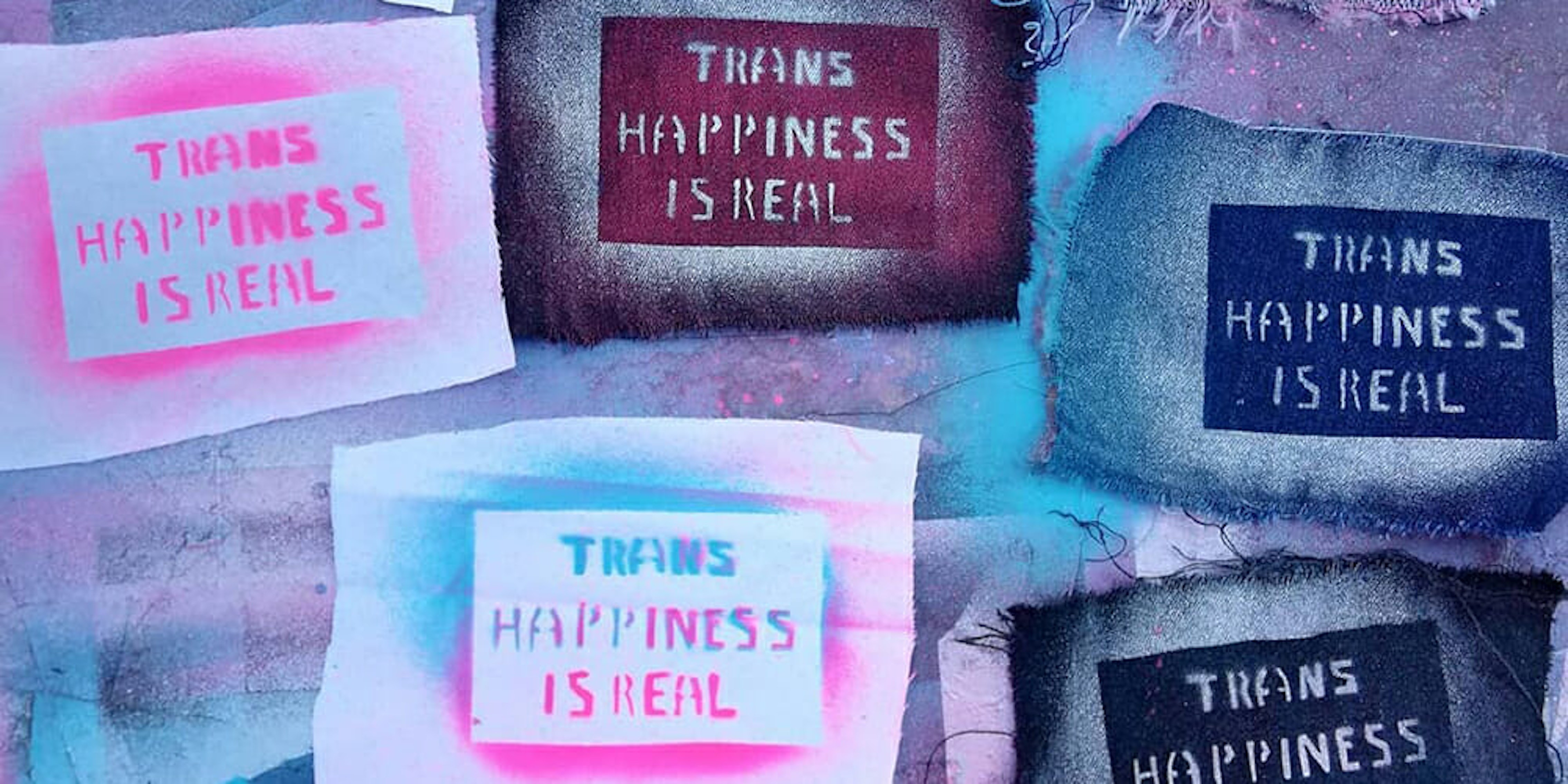 These stickers have implications far beyond one neighborhood’s walls.

Anti-trans sentiment has been on the rise in the U.K. for the last few years. Trans-exclusionary radical feminist (TERFs) crashed London Pride last year and have put out a steady stream of nasty propaganda. So when someone started posting stickers featuring TERF dog whistles around Oxford, England, it started a street art war that had implications far beyond the neighborhood’s walls and light posts.

It started with L, a 23-year-old nonbinary art student, who in February of this year started making neon stickers and posters saying “Trans Happiness is Real” and plastering them around the city. It was partly self-care—an attempt to raise L’s own spirits in the wake of the hostile environment trans people are subject to—and partly an attempt to reach out to other trans folks feeling defeated. Sticker campaigns are common in Oxford, which is part of why doing this occurred to them. (L, who uses they/them pronouns, has been identified by their first initial to protect their identity.)

But soon, something odd started happening: L noticed some of their pro-trans stickers were being covered with transphobic stickers featuring the TERF-adopted phrase “adult human female.” And some of L’s stickers and posters were defaced so that the “trans” part of the message was missing or obscured. The message to L was clear: Someone didn’t like the bold and public expression of trans happiness.

“I got annoyed and started making a bunch more stickers,” L told the Daily Dot.

The stakes and stakeholders in the sticker war increased in April. That’s when S, a cis queer woman in her mid-thirties who also asked to remain anonymous, noticed the anti-trans stickers for the first time. She loved seeing L’s posters, and her initial response was to peel off the offending sticker and put it in the trash—only to see that it had been carefully placed to cover up one of L’s.

Every day on her way to work, S would check on the same sticker. And every day, she discovered it had been covered up again. Clearly, trashing the transphobic stickers wasn’t enough. She reached out to the offending stickerer with a sticker of her own, inviting the TERF to talk through the issue via email.

“Hello!” S’s newest sticker said. “Instead of (or in addition to) our sticker feud, would you consider a chat?”

“I honestly had zero doubt that they would respond if they saw it,” S told the Daily Dot. “Shows you how little I know.”

S’s first sticker attempt was scratched off, and the second was met with some particularly obscene transphobic stickers that she duly got rid of. It seemed the TERF wasn’t interested in discussing things, so S decided to try a different tactic. She wanted to target the passing public, so she posted a range of silly and fun stickers expressing support for trans people. She stickered all over the place, but especially where the anti-trans stickerer had struck.

This only drove the TERF stickerer to greater efforts. But S doubled down, and a few weeks later, she called in reinforcements. She held two big potlucks where attendees designed and made masses of stickers to aid the cause. On June 1, S took the mission to Oxford Pride.

“Those same friends and I wandered around with blank labels and colorful pens,” she said. “Everyone we met was excited to contribute a sticker or two, it was really good fun and a great excuse to say hi to everyone.”

Soon, more people in the community were joining in, taking down the anti-trans stickers or adding supportive commentary of their own. Meanwhile, L kept putting up their own art, eventually creating the Instagram account @transhappinessisreal to reach more people with their message.

Digital communities’ interests in the street art wars grew. Photos of stickers and other responses started to make their way to Twitter, with people documenting their encounters.

big up our sticker comrade who keeps making these awesome stickers around oxford pic.twitter.com/pK1UanagnB

Though it had started life as a secret project, S ended up telling more and more people about the street art war, especially when friends wanted to discuss the stickers they were seeing everywhere. Eventually, S wrote up the whole saga on Imgur. That’s when things really kicked off.

This is an incredible, incredible story that starts out with one person refusing to walk past a horrible anti-trans sticker without doing something about it.
Fighting TERFs + reclaiming spaces with love, dedication + rainbow coloured marker penshttps://t.co/PQ9qJHKyTx

They wrote about their encounters with S and L’s work.

Saw this in Oxford the other day, so glad to have the rich lore backstory pic.twitter.com/CYkMJMB2n5

This is an incredible, incredible story that starts out with one person refusing to walk past a horrible anti-trans sticker without doing something about it.
Fighting TERFs + reclaiming spaces with love, dedication + rainbow coloured marker penshttps://t.co/PQ9qJHKyTx

In a wave of positive support, social media users encouraged the pro-trans stickering community to keep going and made pledges to join.

I read this whole long thing, and loved it! I hope it never ends (or, better yet, the TERF gives up).

To whomever is doing the stickering, you should consider making up cards or something to hand out to those who meet you on the street and offer words of support.

This is so good. It became clear about halfway through that they live in my city, so I'll be keeping my eyes peeled/peeling TERFy stickers. Any idea who's actually behind the post?

Soon, S had her own Twitter account just for documenting the stickers. Her campaign made its way to Reddit, too. There, people dunked on the other side’s memeing abilities and offered to contribute.

“I pass these every day,” Reddit user Hailthorn wrote. “Now that I’ve seen the whole saga I feel I should join in. One TERF can’t deal with an army of stickerers.”

Someone made a sticker wars website, allowing people to upload their own sticker designs or print out copies to put out around their own neighborhoods. People in other cities formed their own private, pro-trans sticker chapters on Facebook.

Meanwhile, L and S made contact with each other and began to coordinate. L said that seeing S’s stickers around Oxford gave them “a really good and positive feeling,” especially when they realized S was a cis ally.

“That gave me another ray of hope for the future, and a reminder that we do have a lot of allies out there—the transphobes are a minority,” L said.

Neither L nor S ever expected the project to grow so big that it would impact people far beyond Oxford’s residents.

“All of this sort of snowballed into this being a community project rather than an individual one run by just me, “ L said. “It feels now like it’s a lot bigger than just me or the other stickerer.”

“It’s really amazed me how something so big could happen without any kind of plan, just getting out there and taking some sort of action,” S added. “And then for that thing to mean so much to people you haven’t even met is extraordinary. “

For now, S isn’t sure how much time she’ll be able to continue devoting to the project. Still, she’s emphatic that she’s “never going to walk by one of [the TERF] stickers without peeling it off.” After all, it only takes a few seconds.

And L’s commitment to sharing trans happiness will live on well past the street art battle.

“I’ll always be trans, so I’ll always be trying to spread this message one way or another,” L said. “I don’t feel I can or should let go of the project as long as I still get messages from people (and kids) saying that it made their day, or made them feel supportive, or they think it’s a really important message. To be able to help other trans people find some hope and positivity like this isn’t something I can easily let go of.”