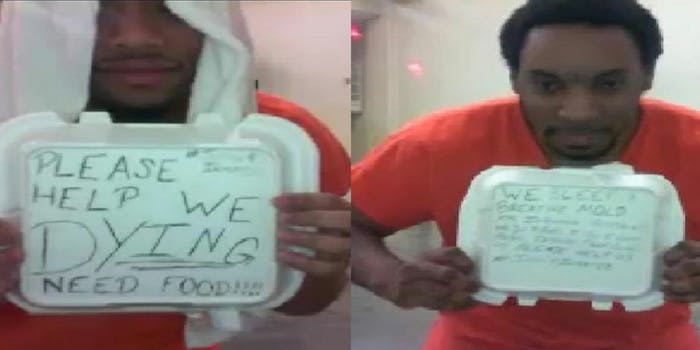 A series of screenshots posted on Instagram has sparked violent protests over the conditions for inmates at DeKalb County Jail in Decatur, Georgia, according to the Appeal.

Malaya Abdullah-Tucker, who says she’s the mother of an inmate, made the Instagram post on April 5. In it, she shared distressing photos of inmates describing the prison’s conditions through messages written on the back of styrofoam containers.

“Dekalb jail is mistreating us,” one of the messages said.

“We sleep …breathe mold,” read another.

The screenshots were obtained during a video visitation last month during which inmates took the opportunity to reveal to outsiders the condition they’re living in.

“Inmates in Dekalb County Jail is actually DYING and being subjected to unhealthy conditions; breathing and sleeping with mold, having skin break outs, being assaulted by correctional officers in areas of the jail where there are no cameras etc,” Abdullah-Tucker wrote. “STAND FOR THESE YOUNG MEN! They are caged away with no voice! No matter what they are incarcerated for, they do not deserve to live in such treacherous conditions!”

The photos spurred protests that turned violent last week and led to numerous arrests of demonstrators.

“We would really like them to learn the facts about how we fulfill our constitutional mandate to serve the public safety needs of this community and those of the more than 1,800 individuals currently in our custody,” Mann said.

The jail is the largest pre-trial detention center in the state and has previously faced allegations for its mold condition. According to Pacific Standard magazine, the jail received $1.5 million last year to address the issue.