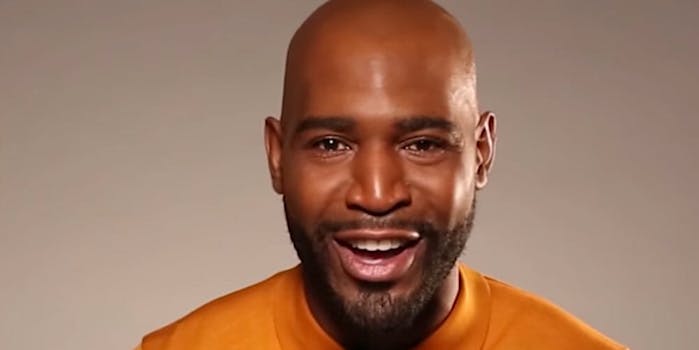 Disability shouldn't be conflated with an unwillingness to hear.

At this point, we can agree that anything Queer Eye does is pretty uplifting. Now, one of its stars is sparking a discussion on ableist idioms.

It started with a conversation Karamo Brown shared on Twitter on Thursday:

Someone just said to me, “I feel like my message is falling on deaf ears…” and I told them that I felt that “saying” is inappropriate. It seems disrespectful and rude to the deaf & HOH community. She said I was being over sensitive. Thoughts?

“Someone just said to me, ‘I feel like my message is falling on deaf ears…’ and I told them that I felt that ‘saying’ is inappropriate,” he tweeted. “It seems disrespectful and rude to the deaf & HOH community. She said I was being over sensitive. Thoughts?”

Indeed, many had thoughts—especially those who have experienced these subtle (but not so subtle) hints of ableism in everyday conversation.

“Thank you! I don’t like the phrase because it implies that deaf people can’t listen,” wrote one user. “I put 10x more effort into communicating than hearing people.”

“I have an auditory processing disorder and I’ve never liked that saying,” wrote another. “It makes me feel like I’m being lumped in with those who intentionally don’t listen to others. So I’d say you’re totally right!”

Some pointed out the societal repercussions of conflating the unwillingness to hear someone versus the inability to do so.

“Another way this saying is problematic is for so long ‘deaf’ has been synonymous with ‘dumb’ or ‘ignorant,’ which perpetuates the stereotype that has been used to suppress and deny Deaf people employment or acceptance in society,” wrote one user.

And from there, a nuanced conversation continued. Some people with hearing disabilities said they weren’t entirely offended. “I’m hard of hearing and I don’t mind the disability-related metaphors. (Could also be bc I’m a writer and very attached to a good idiom),” wrote another Twitter user. “I care more about abled people not speaking on my behalf or presuming to know for sure what will bother me. Say what u want, just w humility!”

i also use it to identify myself. it brings up a good reminder that we are individuals and ok with different identities. good place to start with is asking.

I personally use it (along with hearing loss) as that's how I've always identified it. but like pronouns or other "labels" doesn't hurt to ask!

Some came up with alternatives that send the intended message of “falling on deaf ears” without being discriminatory toward those with hearing disabilities, such as “I feel like I’m talking and the mic is off.”

Instead of "falling on deaf ears", what about "I feel like I'm talking and the mic is off"

“Talking to a brick wall”

Some pointed out that the origin of such language is rooted in systems that traditionally served the privileged. “We need to examine our words/phrases and recognize their origins,” wrote one user. “I rarely hear the expression ‘that’s so gay’ anymore, and it diminished as people got called out for it. Keep up the good work Karamo, always opening minds!”

As writer and activist Lydia X. Z. Brown says, ableist language is “part of an entire system of ableism, and doesn’t exist simply by itself.”  “Language reflects and influences society and culture. Language isn’t important for silly semantic reasons, but because it cannot be separated from the culture in which it is deployed,” she says.

Overall, it was a good exchange and people are learning from each other, which is more than what can be said about most Twitter threads.