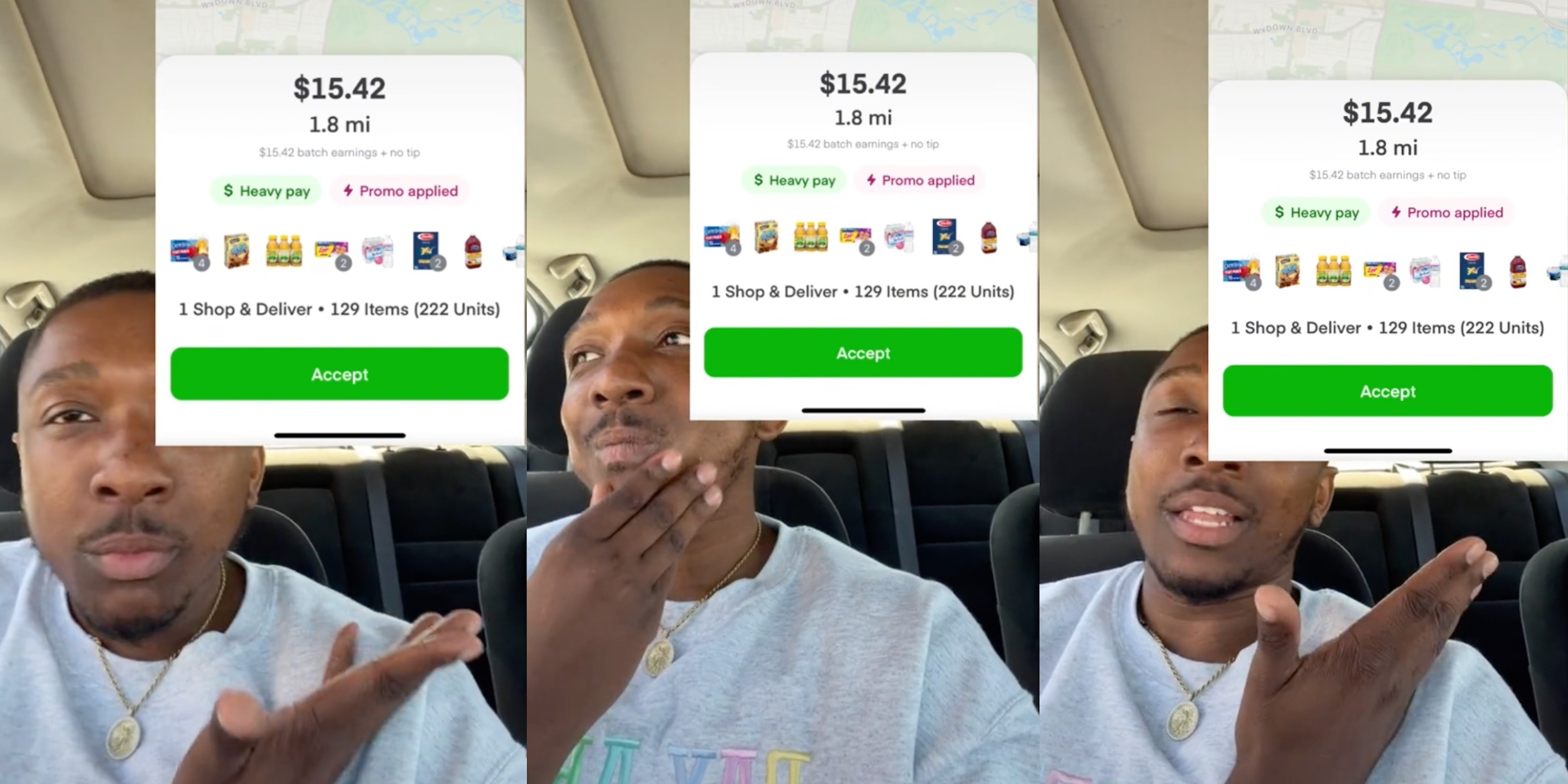 ‘Y’all have to admit this is out of line’: Instacart shopper shows 222-item order pays $15.42, sparking debate (updated)

'This is not just on the customer it's on Instacart as well.'

An Instacart shopper’s screen grab of a 222-item order with an alleged payout of $15.42 and no tip is sparking debate on TikTok, where it has garnered over 232,000 views on the platform.

It was posted by @bjshoty, who says in the video that this kind of order is “unacceptable.”

In his comment section, he elaborated by saying that if the order says “shop and deliver,” that means Instacart shoppers must find each item themselves, and that it would take at least two hours. Although it says 129 items on the screen grab, it also says 222 units, because there are requests for multiples on some items in the order. The shopper also has to deliver the order.

When a commenter asked what would be reasonable, in his opinion, @bjshoty wrote in response that it should be on Instacart just as much as the customer.

“Well this is not just on the customer it’s on Instacart as well,” he wrote. “Base pay for an order with this many items should be $50+ off rip that would at least make it $25 an hour and then a customer tip being between $15-30 depending on the quality of service.”

Commenters are sharing opposing views of the situation, with some writing that for an order that big, there should be a substantial tip.

“I literally get so angry when I’m grocery shopping (because) I’m overstimulated,” one commenter wrote. “So $60 and up sounds good.”

“I can understand some people don’t tip but for 120 something items that’s ridiculous,” another commenter wrote.

Others wrote that the shopper should have rejected the order or gotten a different job altogether.

“If you feel that way then go (and) get a real job lol it clearly says 129 items and if you shop that slow then that’s on you brother,” one commenter wrote.

“You can’t blame the customer when the company is the one ripping you off, and the fact of the matter is you have the option to take the job or not,” another wrote.

The Daily Dot has reached out to Instacart directly, and to @bjshoty via Instagram DM.

Update 3:28 pm CT March 6: The TikToker told the Daily Dot that he did not end up taking the order. He also described his experience seeing similar orders.

“A lot of people understand why I said what I said,” he said. “People who actually do Instacart know that kind of order would’ve taken over two hours to do for $9 with no knowledge of a tip. But negative feedback came from people who tip or feel like Instacart isn’t a luxury service. Most people that have negative comments don’t even use Instacart and would never order 200+ items from Instacart.”

He hopes the feedback from workers will push Instacart to make changes.

“I believe Instacart needs to see feedback from their workers and to see the negative feedback about orders like that could possibly fix the algorithm of the payouts on big orders like that,” he said. “I hate the negative feed back from other people but whoever is running Instacart needs to see that the people who work Instacart think it’s unacceptable for a $9 payout for that many times.”