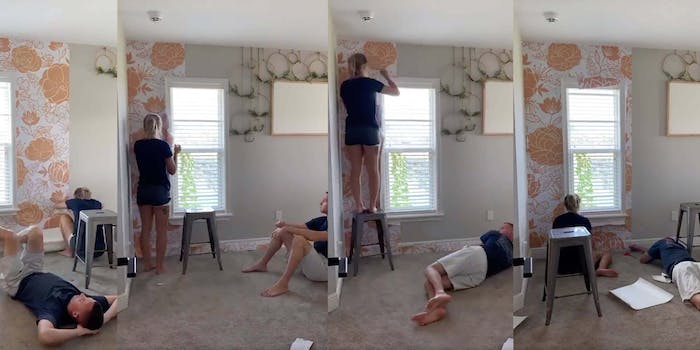 'Let me just say I edited out us screaming at each other 900 times.'

An interior design influencer who goes by Emily has gone viral with a time-lapse video showing her husband doing the absolute minimum to help a bedroom redesign project. Women on Twitter find the video extremely relatable.

Emily, whose Twitter handle is @houseandhens, shared the two-minute video on Wednesday. It’s since garnered hundreds of comments and more than 5.6 million views.

The video shows the two of them (but mostly Emily) moving their bed, changing the wallpaper (which people had a LOT of opinions on), paint a bedside table, and arrange the room. Her husband, Blake, occasionally helped hold wallpaper up. But most of the time, he was just chilling on his phone or staring out the window.

“The moral of the video is that women are more hardworking than men,” one Twitter user commented.

“Let me just say I edited out us screaming at each other 900 times,” Emily wrote in response to one tweet.

People were especially bothered that Blake spent so much time on his phone.

Some bros were offended at the criticism—and related to the man’s method of “help” in the video.

I mean she did say it was HER room not their room . Maybe she wanted to do it herself . He was there to help when she wanted help .

Some people thought him just chilling around was actually cute.

I know everyone’s making fun that Blake was just chilling half the video but I think it’s super cute that he just hung out with you while you were doing your thing. It’s so sweet he was just there spending time with you lol

I know, I was so charmed, especially when he was swinging his feet! You could tell that he was just there for emotional support, it was very cute

It me. Also, if he had done like 80% of the work, the replies would be bUt yOu diDN'T dO AnYtHiNG

Emily, however, doesn’t seem perturbed by her husband’s lack of help. She didn’t respond much to the jokes but did say she “enjoyed the company.” And she’s unapologetic about her new decor: