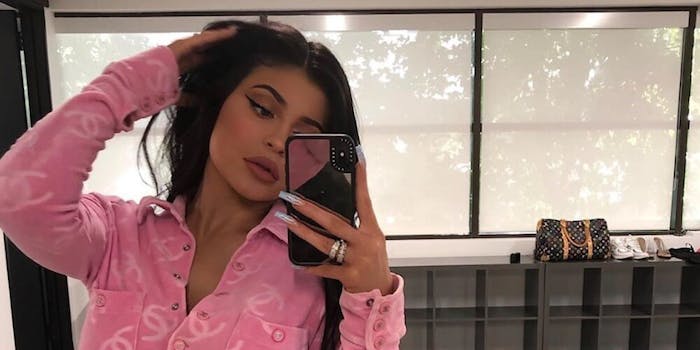 Kylie Jenner accused of appropriating the hijab in photo shoot

Is this appropriation or a throwback?

A recent photograph on Kylie Jenner’s Instagram account has sparked backlash and a conversation about the hijab. The photo features Jenner in a scarf that partially covers her head—similar to the Islamic headscarf many women wear—surrounded by a set of old TV sets.

Jenner posted the photo on Tuesday with no caption but just a hashtag #CR15, a reference to the 15th issue of CR Fashion Book magazine with the Kardashian and Jenner women on the cover.

People are outraged, arguing that the hijab is not a fashion statement and that Jenner, whose family has a history of appropriating cultures, was appropriating the hijab.

Jenner’s scarf in the photo may reveal too much of her hair to be considered traditional hijab style. In Islam, many women cover up all of their hair, and others wear it in a way that reveals a thin line of hair. On the whole, Muslim women who wear headscarves remain disproportionately affected by Islamophobia.

Some commenters said Jenner’s scarf is just fashion and recalls the headscarves that were popular in the 1960s.

Why is a scarf on the head automatically only belonging to Muslims and seems as a “hijab”. It was used way before Muslims did it, and women have been wearing scarves on their heads for fashion forEVERRRR. Every body gotta get triggered easily. https://t.co/SE6ZMqFq3S

The Jenners and Kardashians have a history of being insensitive to other cultures and even profiting from them while those cultures continue to be punished specifically for those attributes. Kim Kardashian, for example, tried (and eventually failed) to co-opt the word “kimono” for her brand.