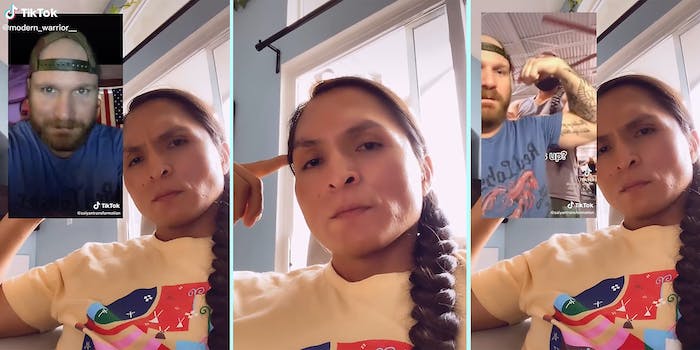 ‘Hey colonizer’: Indigenous TikToker shuts down white Republican who challenges him to a fight

'We are the ones who decide what manhood is.'

After a white Republican challenged him to a fight, Indigenous TikToker Lance Tsosie responded with a lesson on toxic masculinity.

Tsosie’s response, posted June 22, came Tuesday after a series of now-deleted, stitched videos between the two. The videos were prompted by a TikTok from another user calling for a boxing match between Republicans and Democrats.

The Republican, @saiyantransformation, is a conservative creator who debates and reacts to liberal TikTokers. He challenged Tsosie (@modern_warrior__) to a fight, as the two have previously debated on the platform.

“We know you’re all about making money, Lance, let’s do it,” the text on the @saiyantranformation’s TikTok reads.

Tsosie, who makes videos responding to racist TikTokers and educating people on Native American issues, responded by showing off his muscles at the gym, a rebuttal to those who call him “keyboard warrior.” User @saiyantransformation replied with a flexed arm.

Tsosie, who has over 1.1 million TikTok followers, responded with a video educating his challenger on toxic masculinity.

“Hey colonizer,” Tsosie says. “I knew it would only be a matter of time until you resorted to violence. As I’ve proven time and time again that your arguments against the native community have no validity. You see, another main difference between you and I is this: My masculinity is not toxic.”

He continues to describe the differences in their approaches to masculinity.

“I don’t use my strength to intimidate, dominate, or overpower others,” Tsosie says. “Rather, I use it to uplift my community, protect the ones that I love, and to maintain a healthy lifestyle.”

Tsosie explains the definition of toxic masculinity through three components: 1. “the suppression of emotions and masking of distress,” 2. “maintaining an appearance of hardness,” and 3. “viewing violence as an indicator of power.”

He describes how the culture of toxic masculinity is rooted American culture.

“It basically comes down to how we were all brought up: that boys should not express their emotions, that they have to be tough all the time, and that anything other than that makes them ‘feminine’ or weak,” he says.

Tsosie says he had to unlearn these teachings to get to where he is now.

Many users commented on @saiyantransformation’s history of engaging with Tsosie.

“Don’t give him that satisfaction,” wrote another.

Others praised Tsosie’s security in his masculinity.

“Amen!!! Finally a REAL MAN who is using his intelligence rather than trying to weaponize masculinity by an act of barbaric violence,” one commenter said.

The Daily Dot reached out to Tsosie and was unable to contact @saiyantransformation.