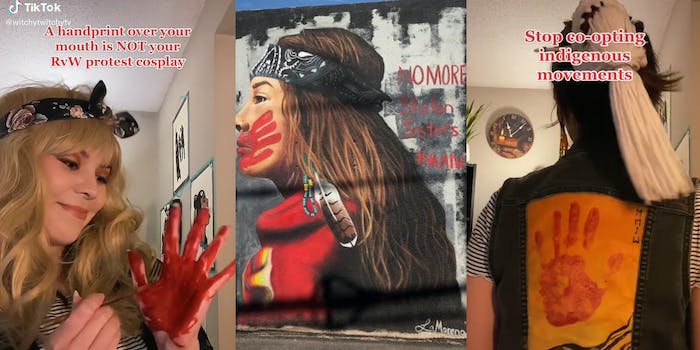 'The bottom line is do NOT co-opt.'

It was a landmark case that heralded a new era for women’s rights, which was overturned 49 years later on June 24, 2022, sparking widespread controversy. Throngs of people began protesting all over the country, from public marches and large in-person gatherings to social media posts. Soon after the overturn, news stories began to spread delineating horrifying scenarios highlighting who the decision was designed to protect, like a 10-year-old rape victim in Ohio who was forced to travel to Indiana in order to terminate a pregnancy.

Many protesters are taking a variety of different approaches to advocating for abortion rights, but there is a particular piece of visual imagery that TikToker @witchytwitchytv says is being co-opted in a way that is harmful to indigenous women: a red hand print over a person’s mouth.

The TikToker uploaded a video demonstrating an example of what the handprint looks like, with a text overlay that reads: “A handprint over your mouth is NOT your RvW protest cosplay.”

In the clip, the TikToker cosplays a white blonde-haired woman and smiles as she smears red paint on her hand. The character looks into the camera, still smiling as she moves to place the handprint across her mouth, before the TikToker dons her usual garb and throws the character to the ground, solemnly looking into the camera.

A caption for the video reads: “You are erasing the progress indigenous activists have made in bringing awareness to the MMIWG2S crisis. Stop silencing us and stop stealing from indigenous people.”

After the character is thrown to the ground, the TikToker turns around to show a patch on her denim vest that displays the red-paint hand-print, along with a smash cut montage of images depicting people protesting violence against indigenous women, along with photos of murals of indigenous women wearing the handprint on their faces, information on attacks that indigenous women endure, and resources for Native American women affected by violence.

The post then goes on to state a percentage disparity of these statistics when it boils down to a conviction rate: “8% of these cases end in a conviction. The U.S. Department of Justice reported that Indigenous [women] face murder rates more than 10 times the national average.”

The American Civil Liberty Union (ACLU) reports that “More than four in five Native American women reported being survivors of sexual violence during this last year. But on reservations in Montana and across the country, reports of sexual violence are almost never prosecuted as a result of racial and gender-based discrimination and legal loopholes that leave Native women unprotected against sexual violence.”

These statistics are reverberated by Indianlaw.org which states “In the United States, violence against indigenous women has reached unprecedented levels on tribal lands and in Alaska Native villages. More than 4 in 5 American Indian and Alaska Native women have experienced violence, and more than 1 in 2 have experienced sexual violence. Alaska Native women continue to suffer the highest rate of forcible sexual assault and have reported rates of domestic violence up to 10 times higher than in the rest of the United States.”

The US Department of Justice’s statistics referenced in the TikTok are from a study titled “Violence Against American Indian and Alaska Native Women and Men” which corroborates these statistics and states that 84.3% of all Indigenous women reportedly experienced violence in their lifetime. The study also scrutinized more specific delineations: sexual violence, physical violence by an intimate partner, stalking, psychological aggression by an intimate partner, and violence within the past year of the study date with the same aforementioned definers.

The same statistics were then measured against surveyed white women, and the disparity in the responses were apparent: in every field Indigenous women reported higher percentages of violence and aggression geared towards them than their white, non-Hispanic counterparts.

ACLU went on to offer a potential reason as to why this is the case and conviction rates for perpetrators of violence against Indigenous women often go unpunished: “One of these legal loopholes stems from a 1978 U.S. Supreme Court decision that eliminated tribal criminal jurisdiction over non-Indian perpetrated crimes on tribal lands. This prevents tribes from being able to prosecute the majority of violent crimes committed against their citizens in their own homes, including crimes of sexual violence. The Supreme Court’s decision in Oliphant, in most cases, leaves the federal government as the only government with jurisdiction to prosecute a sexual assault committed against a Native woman on tribal lands.”

The organization also alleges that in some instances “federal law enforcement officers are the perpetrators themselves.”

In 2016, the CBC reported that Indigenous women in Quebec were coming forth to discuss abuse they suffered at the hands of police officers in their lifetime, including rape and coercion.

Some commenters who saw @witchytwitchytv’s TikTok said that her video was an example of “infighting” and claim that it is exactly what Roe v. Wade opposers want.

One commenter said, “You realize that infighting is EXACTLY what they want because it wastes energy and weakens the movement.”

Another said, “We can do whatever we want! It takes nothing away from you especially when we ARE sharing and standing w you!!”

Others stood with the TikToker and shared the belief that co-opting is harmful regardless of context, akin to cultural appropriation.

One TikToker commented, “For people asking the same question for the 16th time; please don’t use the handprint regardless of the color. The bottom line is do NOT co-opt!”

Another commenter agreed, “Why are people asking for new alternatives to this movement, ‘can we use red?’ ‘Can we use the hand over the mouth in a different colour?’ NO.”

The Daily Dot has reached out to Water Protector Legal and the Indian Law Resource Center via email and @WitchyTwitchyTV on TikTok for further comment.