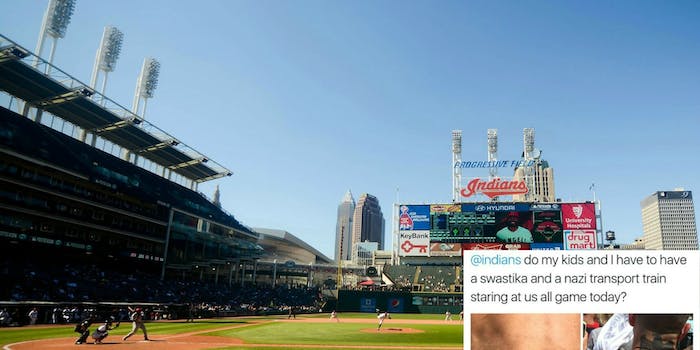 Should you be forced to stare at Nazi tattoos for an entire baseball game?

What to do when the man in front of you is inked with swastikas.

An upset Cleveland Indians fan tweeted out a photo of another fan with Nazi tattoos on Sunday, asking the internet for help.

In doing so, he opened a debate on Twitter about whether the tattooed man should be removed from the stadium or whether his free speech rights trumped the rights of the man who had to sit behind him.

From his now-private account, Indians supporter Martin Gecovich tweeted photos of the shirtless man sitting in front of him, asking the team if he had to sit there and stare at swastikas for hours. (Deadspin captured the screenshot before Gecovich adjusted his Twitter account settings.)

The team didn’t publicly reply on Twitter, but Gecovich said he and his family were moved to other seats. The Indians told the Daily Dot on Monday they weren’t going to comment on the matter.

In the meantime, the tweet opened up a back-and-forth on Twitter between people who believed the tattooed man had every right to show off his body art and those who were adamant the team could (and should) kick him out of the stadium.

The Indians aren't the federal government, they can tell him to put on a shirt or he'll be escorted out/barred from attending games

They're a private entity. They can ask anyone they want to leave

may constitute grounds for ejection. 2/2

I will venmo you $300 right now to pour a full beer on his head.

Some, meanwhile, seemed to blame Donald Trump and his embrace of the alt-right for the man to be brazen enough to have no problem showing those tattoos in a public setting.

I'm going to go out on a limb and say in the 100's of games I have been to down there this would not have occurred until this year. J/S

It's baffling to me how many on this thread is defending this Nazi . Guess it's a sign of the times .

The Indians have come under fire for many years for continuing to use what some believe is a racist image of a Native American as their mascot, Chief Wahoo. Last year, ESPN personality Bomani Jones drew plenty of attention by wearing a “Caucasians” T-shirt that was styled to look like an Indians jersey.