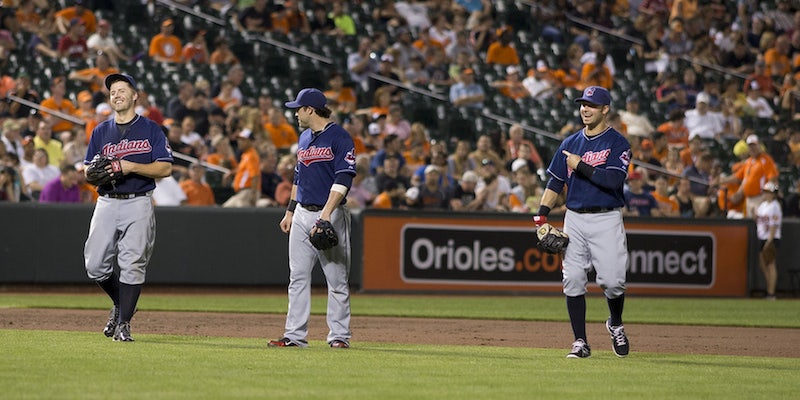 The city is dying, and the continued embarrassment of the Cleveland Indians are at the heart of that reality.

Last year, a photo of a fan at a Cleveland Indians game painted up like Chief Wahoo, the team’s mascot, while wearing a fake headdress went viral; in the picture, the fan, Pedro Rodriguez, faces off with a Native American protester, clearly incensed about being caricatured like a live-action cartoon. In fact, his ensemble was eerily reminiscent of a 2002 comic drawn by Lalo Alcaraz, a Mexican-American cartoonist who sketched the cartoon to “reminds us all about the sordid history of our country’s crimes against Indians.”

This month marks a year since that photograph hit the Web. Peter Pattakos, a local attorney who originally blogged about the photo in his blog, Cleveland Frowns, reported Rodriguez attended this year’s MLB opener wearing once again an airbrushed Chief Wahoo tribute sweatshirt that says “Fear the Chief,” one that includes images of the big-nosed, grinning caricature of a Native American warrior. Despite constant protest from Native groups in the past year—who have also taken the Washington Redskins to task for the use of racial caricature—it’s a sign that nothing has changed.

This season marks the Cleveland Indians’ 100th year of using the Chief Wahoo logo, but there was strangely little celebration of that anniversary anywhere in the city on opening day. The team itself has made the block-letter “C” its primary logo, but fans and apparel manufacturers like Nike continue to prominently feature one of the most disturbing mascots in professional sports on their team gear. (Like the Indians and Redskins, Native protesters have campaign at the company’s world headquarters in Portland, Ore.)

At a press conference on Thursday, April 9 held by the Native American community of Cleveland, Charlene Teters discussed her conversations with fans of other teams with American Indian mascots. A Spokane tribal member and long-time advocate for the retirement of Native American mascots, Teters explained that fans always say, “Why are you giving us such a hard time? Chief Wahoo is way worse.”

Teters then asked the crowd, “That’s not something to be very proud of is it? What are you going to do about it, Cleveland?”

Robert Roche, a Chiricahua Apache of Parma, Ohio and long-time activist, was the Native American in the photo confronting Rodriguez. Roche said that Rodriguez enjoyed his notoriety, continuing to go to games last season while wearing Redface. He even signed autographs for fans. Roche argued that redface at games should be banned immediately. “If you did blackface what would happen? You’d be out of there.”

In the Cleveland’s city council, a movement is working to do exactly that. City Councilman Zack Reed called last year for the city to ban the display of the Cleveland Indians’ mascot Chief Wahoo on public property. He said, “[Wahoo supporters] may say that inside Cleveland, 90 percent say ‘Keep it,’ but they don’t tell you that outside of our footprint, the vast majority of people believe it should go.”

Reed, who is African American, compared Chief Wahoo to the racist, turn-of-the century “Sambo” caricature, a word that’s considered a racist slur in many cultures. However, this comparison is likely lost on Indians fans. Cleveland’s population that is more than 50 percent black, yet there were few African Americans at the game. The crowd was almost entirely white.

An Atlantic survey on fan demographics for the MLB shows an aging, very white audience (83 percent) with a black viewership of only 9 percent. In addition, 5 percent of the viewing audience for MLB games are over the age of 55, and only 24 percent were under the age of 34.

There were few African Americans at the game. The crowd was almost entirely white.

Many Indians fans identified themselves as belonging to European ethnic groups that are still real, cohesive communities in this shrinking, rust belt city. One told protesters he would be fine with the mascot being changed to a diminutive, buck-toothed Slovak (which he identified as his ethnic group) with “white socks and white shoes,” a reference to a local stereotype about Slovaks.

Pattakos, the Cleveland Frowns blogger who is Greek-American and describes himself as a “Cleveland sports fan, living and dying with these teams for better or worse,” dismisses this analogy: “It’s very hard to transpose the context of the immigrant experience to Native Americans who have a very unique history with the United States. They are a group that the U.S. tried to extinguish as a particular race of people. It’s a useless comparison.”

Indeed, while each group is subjected to particular prejudices and hardships, Slovaks have widely been embraced by the American melting pot as white. Native Americans continue to be marginalized, years after their land was taken from them and their people decimated.

The Indians fans’ treatment of the Native American protesters belied not only an ignorance of this history but also a crucial lack of empathy. “Go back to where you came from!” fans yelled. Those activists have been working to fight the logo since 1968, and were they to look for jobs in today’s Cleveland, it’s unlikely that they would be welcomed with open arms.

In World War II, Cleveland was the 5th largest city in the United States; however, lack of employment means that the city has failed to attract recent immigrant migrant. Today, the city ranks just 48th in size. Cleveland’s population is half what it was in 1950, ranking third among major cities in urban population loss (behind New Orleans and Detroit).

The city is dying, and the continued embarrassment of the Cleveland Indians are at the heart of that economic reality. Emory University researchers released a study last year that found Native American mascots cost MLB teams like the Cleveland Indians $2.6 million per year in lost revenue.

The city is dying, and the continued embarrassment of the Cleveland Indians are at the heart of that economic reality.

For a struggling team like the Indians franchise and a struggling city like Cleveland, these numbers make Teter’s call to action even more pressing. In the past 100 years of Chief Wahoo’s existence, Cleveland watched as industry slowly left; the city’s only comfort is the fact that they are “not Detroit.” However, Cleveland lost all three games on Friday, Saturday, and Sunday to the Detroit Tigers.

In the airport, as I left Cleveland, I saw a store display of a t-shirt that said: “Reverse the Curse Cleveland, Ohio” with a Cleveland Indians baseball cap without Chief Wahoo but just a single feather on it.

Photo via KeithAllison/Flickr (CC BY SA 2.0)