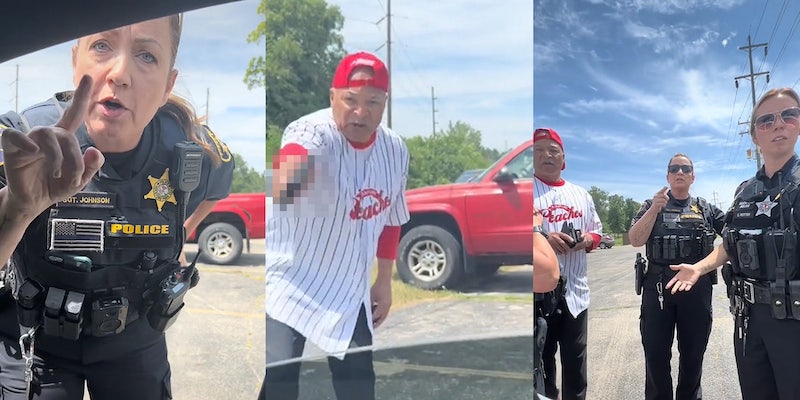 ‘We got a call you’ve been dealing drugs’: Illinois cops pull gun on man after they get suspicious of his tinted car windows

'They are abusing their authority.'

Update July 5, 6:45am CT: According to local news outlet WREX, the Rockford Park District Police said Jovawn Reynolds was the one who called the police on himself several times to capture how the officers responded for social media. WREX reported Reynolds has since been charged with False Alarm/Complaint to 911.

WREX also reported that Reynolds’ tinted windows allegedly “severely limited the questioning officer’s visibility so the uncooperative suspect put the officer’s safety in question” and that once “it was determined that the driver was not a threat,” Rockford Park District Police Chief Theo Glover, one of the responding officers, “put his weapon away and searched the car.” The officers reportedly found no illegal drugs, which they claim is what the last phone call to them was about. According to WREX, Reynolds was initially issued citations for an obscured license and failure to stop.

Original story: A recent series of viral videos alleges to show Rockford County, Illinois, police officers pulling a gun on a man in part for having dark-tinted windows.

In the first video posted by TikTok user Jovawn, someone wearing a baseball jersey holds a gun pointing in his direction. Another officer tells him to “put [his] phone down” and demands he unlocks his car doors.

Over the course of the videos, the stated reasons for Jovawn’s apprehension change. While the police initially say that they had anonymous calls reporting drug dealing from the car, they then state that they were suspicious of his tinted windows, before eventually checking his insurance.

None of these crimes are violent or moving violations, and it is unclear what danger a police officer could have perceived from these suspected crimes that would lead to greeting Jovawn with a gun.

In the second video, Jovawn repeatedly asks for the man in the baseball uniform’s name and badge number. Other officers later state that this person is a police chief. While Jovawn says he gave the officer his ID, the officer does not identify himself, give his badge number, or holster his weapon.

The third video shows a younger officer attempting to reason with Jovawn, asking how he would feel as an officer if he observed Jovawn’s tinted windows. Jovawn says he is getting his window tint changed (Jovawn later stated that he has already been ordered by a judge to do so and already has plans to change it, posting an image of his case as evidence).

When one of the officers asks why Jovawn is “coming at [them],” he answers that the officer who is not in uniform pulled a gun on him.

Jovawn then asks for the sergeant. The officers insist that they want to first search his car to see if he has anything illegal, the evidence for which they cite as an anonymous tip. Jovawn does not comply, saying that he feels unsafe continuing to work with officers who have threatened him.

“You told me you wanted to tase me, and then you were going to shoot me with your damn gun,” Jovawn says to two officers.

“Yes,” one of the officers says, “because we have every right to do that.”

The younger officer and Jovawn have another interaction, with the officer saying that she will call the sergeant and asking Jovawn to step out of the vehicle so they can perform a search.

Part four appears to have been deleted and reuploaded, showing further interaction between Jovawn and the officers.

In part six, the sergeant offers to arrive at the scene via walkie-talkie but notes that other officers with jurisdiction were already on-site. Jovawn asks for the sergeant to be told that he does not feel safe with the current officers given that one of them pulled their weapon on him.

The sergeant does not come, and finally, Jovawn’s car is searched. The police appear to find nothing illegal as they claim they are letting him go, though later insist on checking his insurance. His insurance is valid, as documented in a later video.

Jovawn films the specifics of the search in another video.

“You don’t have to be rude,” one officer says in this video.

“You don’t have to point a gun at me,” Jovawn responds.

This video also offers more insight into Jovawn’s window tints, which he claims he is planning to have removed once his specialist has availability. He claims he is still within the judge’s allowed time frame for doing so.

He was not arrested, per Rockford County Police’s website.

While some users on TikTok said that Jovawn should have worked harder to comply with police orders, others thought that his behavior was appropriate given the situation—and that he might have a lawsuit on his hands.

“Brother you better take this the mile and get a bag,” wrote one user. “Unreal they pulled a gun, threatened your life over a WINDOW TINT.”

“Sue them and in court tell ‘em you were scared for your life man cause you WERE,” added another. “Traumatizing, a gun aimed at you by ‘protectors’. Smh.”

“After watching each video in order unlike some people I’m glad you’re safe,” a third stated. “That was a scary, possibly life-threatening experience…I hope there are serious consequences for those officers unprofessionalism, ignorant, incompetence. Especially the man out of uniform. Get that bag!”