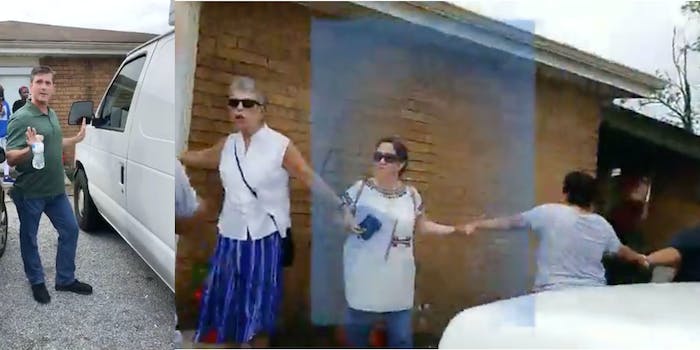 The standoff lasted hours, and the video went viral.

A group of neighbors banded together to protect a father and son after Immigration and Customs Enforcement (ICE) agents blocked them in their driveway Monday morning, eventually helping the duo escape, according to multiple news reports and documentation on social media.

A white truck had reportedly been driving around in the neighborhood for the past two weeks, but only since Monday began flashing red and blue rights, raising alarm bells for the residents, the Tennessean reported.

ICE agents blocked the car with the father and son inside on their own driveway, reportedly without a warrant.

When neighbor Stacey Farley came out for a smoke a little after 8am, she reportedly saw what was going on and gathered other neighbors. Many of them, over the next few hours, helped the father stay in the car with his son, bringing him food, water, and helping refill his gas so they could keep the AC on in the car, while ICE agents waited around.

“They’re in unmarked cars, they’re not in uniforms,” Call says in the video, which was recorded a bit later.

3RD UPDATE: Today, Movements Including X – MIX and 10 local and national organizations released a recording showing the coordination between ICE and Metro Nashville Police goes quite a bit further than the police and mayor acknowledged on Monday. Check out the video and demand for a city investigation and audit into how MNPD resources are being tied up in supporting ICE's family separation raids here: bit.ly/investigatemnpd2ND UPDATE: The organizing today happened largely because of local neighbors were supported by dedicated people at Movements Including X – MIX; if anybody wants to donate to help build infrastructure for this kind of work to continue they can send donations to their Venmo at @mixnashvilleUPDATE: people power worked and this dad is still with his family. But ICE is regrouping and we will need to be alert. Sign up and spread this link to the MIX volunteer form of you’re willing to take a stand to defend our neighbors against ICE: https://docs.google.com/forms/d/e/1FAIpQLSei3iIIva5zPVDCQEWeMRa6F88QI0D9c3b5jnFhW6E061VFjg/viewform?vc=0&c=0&w=1————-Call David Briley’s office, we need him on scene now. Metro police officers are here in support of an ice operation that has a father and his son hold up in their driveway for the last four hours. Spread the word!

The effort eventually brought out immigration activists, a councilmember, and volunteer workers from advocacy group Movements Including X. Police were also on the scene but not actively helping the ICE agents, as seen in Call’s video.

“Seeing these children ripped away from their parents in the way they do it makes me wanna cry,” a neighbor who said they’ve known the family for 14 years said in Call’s video. “It hurts to see people go through what they’re going through. I understand if they didn’t take proper procedures to be United States citizens, maybe they didn’t know how to do it, maybe they waited too late but there’s a way to do it.

“They shouldn’t have to be broken away from their parents,” the neighbor said, adding that keeping the agents on camera was likely helping the family.

The father and son remained in the car until the ICE agents left.

In a separate video, McBride documented the moment the ICE car pulled away. In her description, she wrote that Facebook “put a music filter” on her live stream. The audio from the video is not clear as there is a children’s nursery music video playing over the voices of the people on the ground. There is also a tinted window of a visual filter throughout the video.

“It was definitely concerning. It means Facebook is flushing the First Amendment down the toilet and, by default here, siding with Nazis,” McBride told the Daily Dot about her video being tinted with filter and instrumental lullaby.

Call did not respond to the Daily Dot’s request for comments.

Well, my friends, I've got a major confession. I'm a Facebook live idiot. Yesterday I thought someone had reported my livestream of ICE trying to kidnap a man in Hermitage. Brahms Lullaby came on drowning out the other sounds and there were these stupid nightcaps that popped on and off the heads of the ICE agents. I blamed Facebook. But it was me touching the screen where these goofy affects pop up. I'd never noticed them before. So, there's lots of crappy things that Facebook does. This wasn't one of them. Facebook put a music filter on my livestream. The agent gave a name and number to call, but you couldn't hear it. This is how the SS is working now. The family is in the house. We formed a chain to get them in. You know mess is going on when ICE and MNPD drive away.https://docs.google.com/forms/d/e/1FAIpQLSei3iIIva5zPVDCQEWeMRa6F88QI0D9c3b5jnFhW6E061VFjg/viewform?vc=0&c=0&w=1

Halfway into her video, the white car is seen driving away and a woman behind the camera is heard saying, “ICE is driving off.”

A few seconds later, the police cars are seen driving off from the street, and other neighbors are seen gathering around the residents’ car.

“We’re making a chain,” McBride is heard saying from behind the camera.

After about eight people make a chain around the car, some are heard counting to six in Spanish before the father and the son run out of their car into the home while the neighbors urge them on, “Go! Go! Hurry up!”

After the two are safely inside their home, the neighbors are seen clapping and cheering.

ICE has been on a mission to arrest migrants across the country, following weeks of taunting by President Donald Trump about much-anticipated ICE raids. But raids that Trump ordered earlier in July ultimately didn’t happen. On Tuesday, the New York Times reported that out of the 2,000 migrants who were targeted for arrests, ICE had so far managed to arrest 35 people.

The Times report claimed that advance reporting of the scheduled raids prepared families to either relocate to evade arrests or be educated about their rights if ICE did show up at their doors.

The latter definitely seemed to have worked in the case of the Tennessee father and son, who were able to stay in the car while staying within their rights given the lack of a warrant by the agents.

As Call says in the live video: “He’s seen what other people have done around the country; he knows his rights. They showed him a piece of paper that’s not a judicial warrant and so he stayed in his car.”